The Magnitude Of India's Economic Slump And How It Can Recover

India has more than a sixth of the world's population. It's also still a poor country. So what happens there is incredibly important for the welfare of the human race.

For a long time, good things were happening in India. Cautious pro-business reforms in 1980s were followed by the dismantling of much of the country's overbearing regulatory state in the 1990s and 2000s. At the end of a long boom, India was five times richer per capita than in 1980.

Although the gains tended to go to a small slice of the population, India managed to make great strides against extreme poverty; it's no longer the country with the largest number of very poor people (that dubious distinction now goes to Nigeria). Development has meant food, shelter and sanitation for hundreds of millions of Indians.

But this good news is now old news. The country has entered a major economic slowdown: 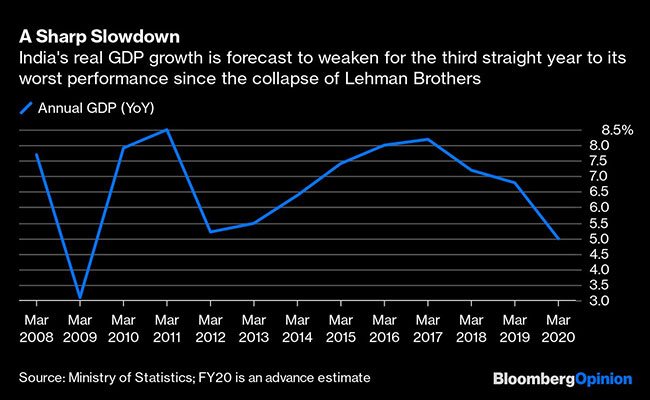 The growth number probably understates the magnitude of the slump. Industrial production has actually shrunk in recent months, as has the production of capital goods. Electricity generation has also slowed by more than gross domestic product growth.

A series of interest-rate cuts has failed to stop the decline. India already has real interest rates of negative 2.2%, lower than other developing Asian countries, suggesting that monetary policy isn't going to be the answer. The government of Prime Minister Narendra Modi has also been engaging in structural reforms since last summer -- cutting taxes, opening up the country to more investment and privatizing industries. But although these might help in the long run, they have failed to stem the recessionary tide.

Diagnosing the cause of the crisis has been difficult. In a new paper, economists Arvind Subramanian and Josh Felman argue that the root of the problem isn't a shortage of aggregate demand, or even Modi policy blunders such as demonetization, taking currency out of circulation. Instead, imbalances in the country's growth model have led to a buildup of bad assets in the financial system.

Before the global financial crisis of 2008, Subramanian and Felman note, India's exports were growing robustly. But then in about 2011-12, when export growth slowed as a result of the crisis, investment fell, corporate profits were squeezed and business loans began to go bad. A rise in troubled loans on bank balance sheets should have caused a recession, but India's economy was saved by a combination of falling oil prices, a boom in shadow banking and government stimulus. These, the economists argue, gave the economy a lift by causing consumption to rise while also creating a housing bubble. Banks became ever-more exposed to real estate: 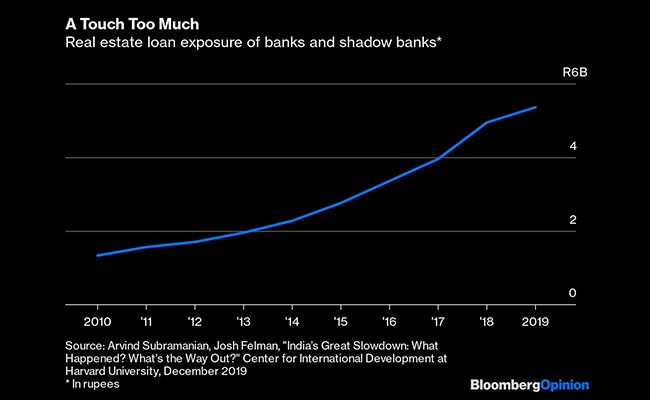 Now, Subramanian and Felman claim, India's housing bubble has burst, with prices starting to fall as unsold inventory piles up. That is adding to the stock of  bad loans on bank balance sheets -- which had never really recovered from the souring of corporate loans a decade earlier -- while also putting stress on the shadow banking system. This, they say, was the cause of the abrupt drop in lending in 2019.

So to get India's economy going again, bank balance sheets need to be cleaned up. Modi has been merging government-owned banks, but there is much more that can be done. Similar to what the Federal Reserve did in the U.S. after 2008, the Reserve Bank of India should engage in quantitative easing to purchase loans from banks and shadow banks. This might give rise to inflation, which is accelerating -- something that was absent in the U.S. after 2008. But it could help get loans flowing through the economy again. Modi's government can also help by creating a so-called bad bank to absorb troubled loans.

But at the same time, India shouldn't ignore the need for long-term structural reforms. Cleaning up bank balance sheets might stem the current slump, but until lenders see a major set of new opportunities, the economy won't return to rapid growth.

A 2016 paper by economists Juan Pablo Chauvin, Edward Glaeser, Yueran Ma, and Kristina Tobio might hold a clue about what the new opportunity might be. In most countries, including developing ones like China and Brazil, the number and size of big cities is governed by a statistical relationship known as Zipf's Law, which states that the second-biggest city is half as large as the biggest city, and so on. India, however, violates the law, suggesting that it's underurbanized. Two out of three Indians still live in rural areas: 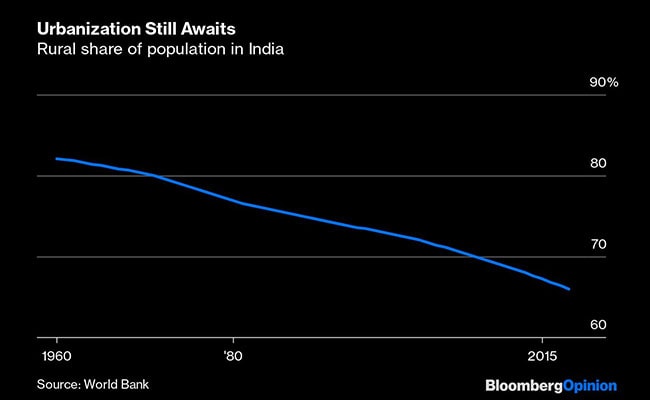 Urbanization is a driver of growth. Moving people from farms to cities would help alleviate India's low agricultural productivity, because the same land would be farmed by fewer workers. If the new urban residents get jobs in labor-intensive manufacturing, incomes would rise very quickly, so India should couple urbanization with a drive to absorb some of the manufacturing jobs that are leaving China as a result of the trade war and coronavirus outbreak. But even if city dwellers work in the service sector, it's better than being on the farms.

India can help medium-sized cities grow by building better urban infrastructure and providing better urban services. It could even offer financial incentives to encourage people to move. The subsequent revival in the housing market, and a cheap labor force for low-end manufacturing, would give recapitalized banks more opportunities to lend. That could give India a manufacturing growth model similar to that of Bangladesh or Vietnam, complementing its vaunted service industries.

Thus, a combination of macro and micro policies might be just what's needed to get India out of its frustrating and complex recession.

(Noah Smith is a Bloomberg Opinion columnist. He was an assistant professor of finance at Stony Brook University, and he blogs at Noahpinion.)