The Contrasting Telecom Fortunes Of Mukesh And Anil Ambani

Two billionaire brothers, two bonds, two very different fates. This isn't the plot of yet another sequel to Jeffrey Archer's Kane and Abel, though it could very well be.

Moreover, Reliance Industries Ltd.'s $800 million offer came days after a default by Reliance Communications Ltd., run by Mukesh's younger sibling, Anil Ambani. My apprehension that global investors would paint all Reliance bonds with the same brush -- and punish the older brother for the younger's missed coupon -- turned out to be unfounded.

The unraveling of Reliance Communications boils down to a combination of poor balance-sheet management ($7 billion in debt) and intense competition from Mukesh Ambani's Reliance Jio, a new fourth-generation wireless service that upended the business model of companies like RCom by offering free calls and cheap data. Meanwhile, the older Ambani's good fortune in the bond market is thanks in part to an unexpected one-notch upgrade of India's sovereign rating on Friday by Moody's Investors Service. 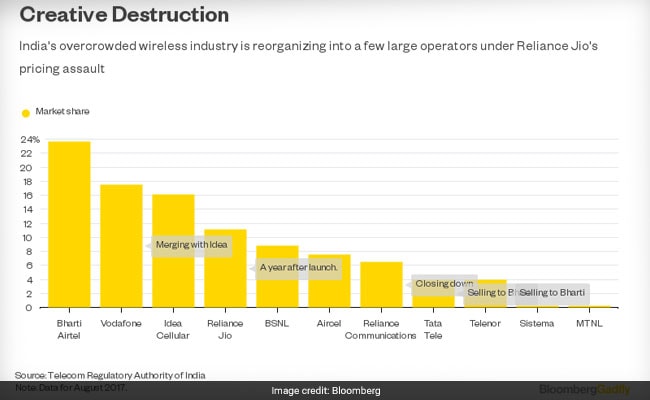 Mukesh Ambani has played it well. The Jio network has cost Reliance Industries $30 billion. But while betting big on telecom, which won't make any money until India's data use explodes and Jio comes to dominate the industry, Ambani also invested heavily in his refining and petrochemicals empire, which spews out cash by the truckload. S&P Global Ratings expects Reliance Industries' Ebitda to exceed 900 billion rupees ($13.8 billion) in fiscal 2019, which would be double last year's level and cut debt-to-adjusted Ebitda to 2 times, from 3 currently.

Also, the Reliance Industries bond issue isn't a sale of new debt, but merely a refinancing of the $800 million, 5.875 percent perpetual notes the firm had sold four months before the 2013 taper tantrum shuttered emerging markets.

Before you conclude that Mukesh Ambani has emerged victorious in securing cheap refinancing, think about the real winners here: the Asian private-bank clients who lapped up the 5.875 percent note. 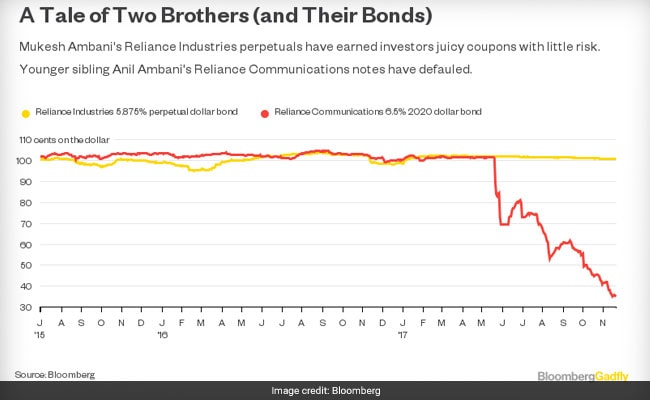 At the time, Reliance probably took the bet that Treasuries would continue their decline, and capital for emerging-market borrowers would become costlier. When Ambani sold his perpetuals in January 2013, 30-year Treasury yields had hardened to about 3 percent, a half-percentage-point increase from July 2012. They would go on to rise to almost 4 percent by the end of 2013.

But that long-term U.S. risk-free rate is now down to a quiescent 2.77 percent. Ambani was wrong to be bearish on Treasuries and lock in such a high cost. Had the company issued five-year notes instead of perpetuals, its borrowing expense might have been a lot less than 5.875 percent. ONGC Videsh Ltd., a unit of state-owned Oil & Natural Gas Corp., sold five-year notes a few months after Reliance at 2.57 percent.

All the older Ambani is doing now is closing his costly short. It appears to be the smart thing, though investors who have pocketed the perps' juicy coupons have been smarter.

As for who got the lemons, that answer is clear: investors who backed the younger sibling's 2015 bond, rated four rungs lower on Moody's scale back then. The defaulted note is going for 35 cents on the dollar.

The billionaire brothers' fates and fortunes decoupled; some investors just didn't get the memo.

(Except for the headline, this story has not been edited by NDTV staff and is published from a syndicated feed.)
Comments
Mukesh AmbaniAnil Ambani