"There is no more terrible thing than to live and have one's being under the shadow of a man-eater..." wrote the legendary Jim Corbett in his classic 'Maneaters of Kumaon' in 1944.

Fear sinks deep in a countryside which is known to harbor a man-killing big cat. Many a wildlife enthusiast in recent months has shown a brisk readiness to assail any move by Forest Departments across states to deal with such 'problem' animals. While vigilantism serves to keep the system on its toes, sweeping and indiscriminate criticism only compounds the challenges in wildlife management.

Man-animal conflict is a complicated issue, wherein history, culture and religion, socio-economic aspects, forest and revenue land interface, myriad governmental jurisdictions, an expanding human population and its needs all play their part. It is hence important to segregate it from the issue of immediate and day-to-day wildlife management. The latter, which needs prompt and effective action, cannot be held hostage to the intransigence of the former. 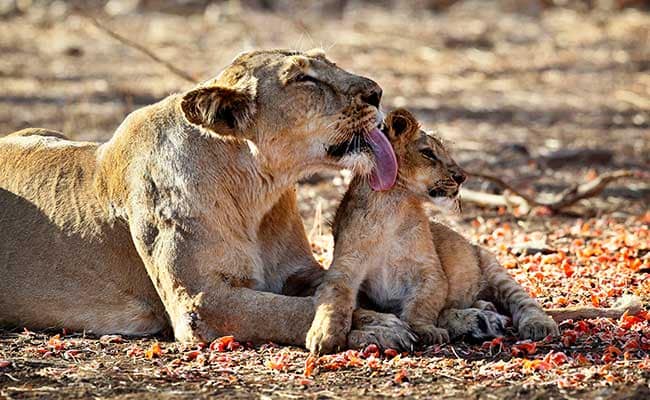 Nothing impacts the long-term success of wildlife conservation like local community support and goodwill, and prompt action to protect this sacrosanct pillar of conservation becomes inescapable in cases of conflict, most imperatively in that most grave of circumstances: a human kill.

This rather wide detour was to give context to the subject at hand: why conservation of the Asiatic Lion in India's Sasan Gir National Park and surrounding areas is one of the world's greatest conservation success stories.

Several leading national and international media outlets recently ran rather jeering accounts on the tackling by the Gujarat Forest Department of the recent spate in human attacks by lions around Gir, notwithstanding the unavoidability of the measures. After three attacks over a period of five months, the department was forced to incarcerate 17 suspect lions, removed from the general area where the attacks occurred. The individuals responsible for the attacks, three in all, identified by scientific tools, shall be sent to the Sakkarbaugh Zoo in Junagadh. The rest will be released back into the wild.

The media's rebukes are a far cry from the story that deserves to be told, propagated and emulated: how Gujarat brought its lions back from the brink of extinction to an extraordinarily promising recovery. 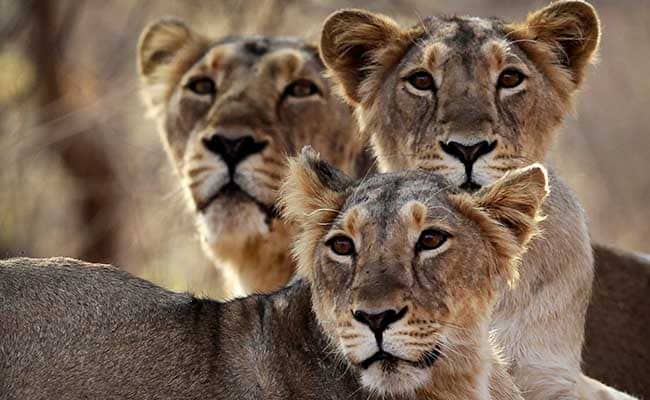 Lionesses resting at the Gir Sanctuary in Gujarat in this March 24, 2012 photo (Associated Press)

In contrast to the plight of most wild species around the world, the Asiatic Lion is the resurgent King! All but wiped out a century ago, the Asiatic Lion has enacted a recovery unlike any other, made possible by efforts beginning with the erstwhile ruler of Junagadh state, Mahabbat Khanji III, who banned the  hunting of lions and extending all the way to the protective local communities that remained tolerant and proud of the lions through the decades, a vigilant Forest Department, successive governments that supported the cause, and the place of pride that the lion holds in the hearts of the people the region.

In a hundred years, the lion population has seen a 15-fold rise - it now stands at 523, with six separate metapopulations across five districts. Beyond the 1500 sq. kilometers of the Sasan Gir National park, lions are now found in a range of over 20,000 sq. kilometers in forest patches across an area referred to as 'Bruhad Gir' (Greater Gir).

Let's look at key differentiators that define this unique 'conservation ecosystem' that has enabled this remarkable jump in population.

Foremost is the support and patronage of local communities, evidenced by the near complete absence of any retaliatory killing of lions by villagers after frequent cattle kills. A popular sentiment amongst locals is "saavaj che to ame chye, ame chye to saavaj che" (we thrive since the lion thrives and vice versa). The lion is an important social and cultural emblem for communities that live in and around Gir, who accord it an exalted cultural status not unlike worship. In addition, there is a prevalent understanding in local communities of their economic livelihood being connected with the protection of the lion. 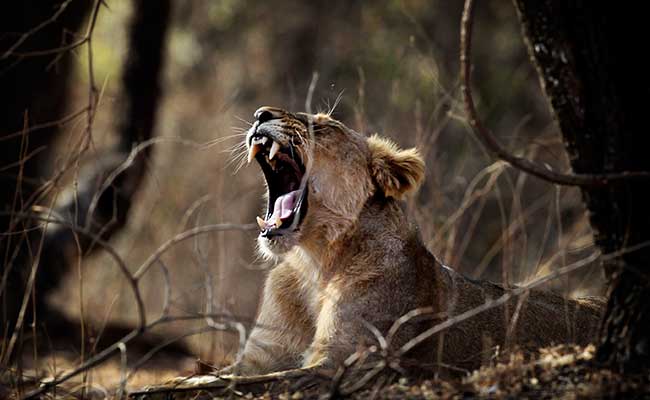 A lioness yawns at the Gir Sanctuary in Gujarat (Associated Press)

This local goodwill is in-turn protected by the highly efficient conservation management of the Forest Department. In the sporadic cases of human killings, the department ensures compensation to relatives within 24 hours of the incident (a sum of 2.25 lakhs, which is likely to be increased). To some extent, this swift action has helped mitigate the sufferings of many a poor family.

In cases of cattle killing, a frequent occurrence, there is a compensation mechanism designed to promptly assuage the loss. The compensation given to locals for loss of cattle in Gir is amongst the highest in the country - up to Rs 16,000 per animal lost, made via a direct transfer into the bank account of the individual concerned. Cattle kills are usually verified within 24 hours by field staff and reported to respective range offices. Gir West and Gir East combined alone account for anywhere between 1,800 to 2,000 cattle killings by carnivora every year, demonstrating the scale of the management's challenge.

Coming to the lion management itself, one would be hard-pressed to find a more "on-the-job" team of forest officials than at Gir. Control centers monitor patrolling teams on an hourly basis. An individual team of guards for each 'beat' sends out a daily 'Sinh Avlokan report' (daily lion sighting report) to the range and divisional offices - this includes GPS readings, lion activity, uncommon movement towards villages if any, pride number, missing individuals, etc. The field staff itself is one of the best equipped in the country. A remarkable feature of the field staff is the all-women teams, a first for the country, who have earned laurels for their proficiency. 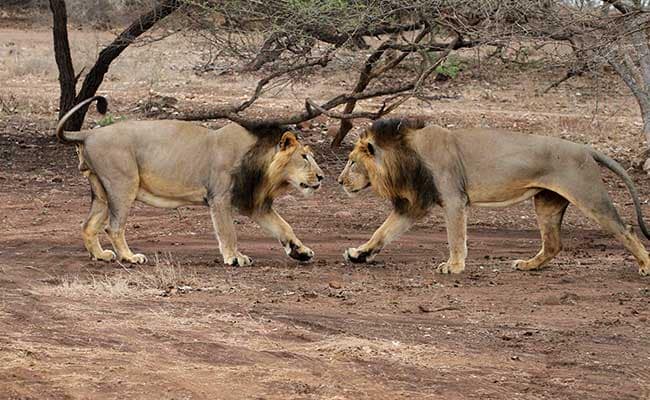 In this June 9, 2013 photo, two endangered Asiatic lions face each  other at the Gir Lion Sanctuary at Sasan in Junagadh district of Gujarat  (Associated Press)

A positive result of this continuous tracking is the early discovery of injuries to lions. Gir has five state-of-the-art wildlife rescue and treatment centers. A standard trend is for a response team of veterinarians to reach a location within an hour of receiving a report from the field of an injury. Because of this, each year, about 40-odd lions are rescued and released after treatment, boosting the survival rate.

The total lion population is accounted for across the whole range via monthly 'complete counts' through direct sightings on full-moon nights - this ensures a continuous track of numbers and reduces error in enumeration.

To reduce the response time in addressing a situation where lions get too close for comfort in human-dominated areas, a system of 'Van Prani Mitra' has been set-up, where every village has a 'village wildlife watcher' appointed by the Forest Department, who reports local wildlife movement, assists in managing crowds and preventing accidents.

Successive governments in Gujarat have supported lion conservation to the full extent. As a case in point, consider the occurrence of poaching of  lions around 2007, after which a prevention system was designed that ensured it did not occur again till date. In that incident, the gang of poachers was pursued across state lines, apprehended and a fast-track court set-up for the trial. The process from capture to conviction was completed in a short span, the co-operation between the Forest Department, police, judiciary and government set an example for other states. Subsequently, Narendra Modi, then Chief Minister, set up a special lion conservation team with immediate sanctioning of a separate budget, envisaging provisions for long term conservation of the species.

All this is not to say that Asiatic Lion conservation in Gujarat is bereft of problems and challenges - the expanding lion population with the continuing toll on cattle and occasional human kills, the spread to human-dominated areas, the changing landscape and diminishing forest corridors, the  pressures of encroachments, road, railways and the like present an enormous challenge.

That said, conservationists around the world could do well to take a leaf or leaves out of the book of Asiatic Lion conservation in Gujarat.

(Priyvrat Gadhvi is a Biotechnologist and Member, State Board for Wildlife, Gujarat.)