Opinion: Vodafone's $30 Billion Debt In India Leaves It Close To Cutting Out

The world's cheapest data costs have done wonders for India by helping spread the benefits of the internet beyond a tiny, urban, affluent class. But there's a problem: Successive governments have hounded telecom operators with outlandish financial demands. Now things have gone too far. Vodafone Idea Ltd., one of the three private-sector competitors left standing in what used to be a field of a dozen players, is very close to crumbling under the weight of its $30 billion debt. That will effectively turn the wireless market in the nation of 1.4 billion people into a duopoly.

Maybe not immediately, but the gains to consumers could be reversed because of lack of competition. (An international survey shows Indian data plans to still be highly affordable, though they're no longer as inexpensive as the world-beating 9 cents per gigabyte last year.) The pace of digitization of the economy could slow. Avoiding this scenario calls for some creative thinking.

Nationalization should rank high among the few viable options worthy of consideration, even though the state getting into the driver's seat of private enterprise has in the past created zombies on perpetual taxpayer support, such as Air India Ltd.

In a research note this week, Deutsche Bank AG's telecom analyst Peter Milliken and associate Bei Cao laid out the stark choice facing what they describe as "the most painful market we have come across to operate a telecom." Prime Minister Narendra Modi's government, they say, "needs to make a call - duopoly or state control of Vodafone Idea."

It has come to this because of a two-decade-old dispute over how revenue is to be defined for license fee and spectrum usage charges. Operators thought only receipts from core telecom services had to be shared; the government wanted a piece of everything from rent, dividend and interest income to profit on sales of fixed assets. India's Supreme Court upheld the government's demand in 2019, putting U.K.-based Vodafone's joint venture with Indian billionaire Kumar Mangalam Birla on the hook for 584 billion rupees ($7.8 billion).

The telco avoided bankruptcy when the court last year allowed the payments to be made over 10 years. But the relief was short-lived. With the judiciary recently rejecting Vodafone and its larger rival Bharti Airtel Ltd.'s plea to rectify what they say are errors in the government's calculations, the viability of the British operator's joint venture is again in doubt. 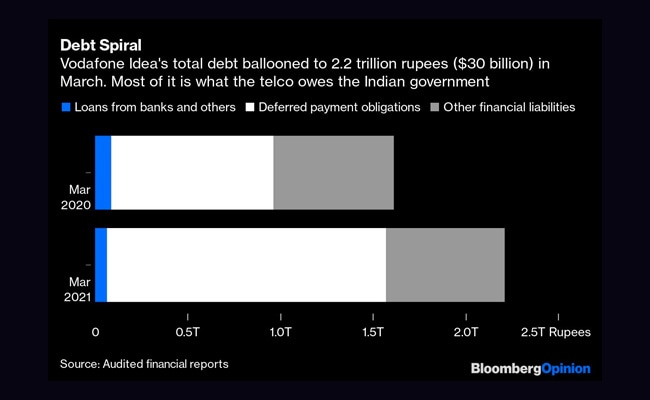 Finances are tight even for tycoon Sunil Mittal's Bharti, which this week raised the minimum price for a prepaid subscription by 60%. But then Mittal isn't bleeding customers like Vodafone Idea, which has lost a third of its formerly 400-million-plus subscribers in three years. At the same time, aggressive pricing strategies adopted by Mukesh Ambani, India's richest man, for his five-year-old 4G service has kept revenue per user depressed. Vodafone Idea is unable to garner the operating profit it needs to pay interest on bloated debt.

Its two partners had merged their separate wireless carriers in 2018 to withstand Ambani's onslaught, which also bankrupted his younger brother Anil Ambani's telco. But now, they're probably done throwing good money after bad. "We try to give them very practical support in what is a very challenging situation, but that does not extend to additional equity from group," Vodafone Group Plc Chief Executive Officer Nick Read said recently about the India venture. According to local media reports, both Vodafone and metals tycoon Birla are ready to cede control if a strategic investor comes in.

There has been much speculation, but no white knight has actually emerged. As long as Ambani's Reliance Jio Infocomm Ltd. continues to keep a lid on data prices to win market share - it has amassed 440 million subscribers in five years - the economics are unlikely to improve.

As a new entrant, Reliance Jio has dodged the bullet of outsize back-payments to the government. Armed with equity from Facebook Inc. and Alphabet Inc., Ambani is building a digital commerce enterprise to supplement mobile carriage. Reliance will soon start selling a new Android-based smartphone, developed in partnership with Alphabet's Google. If attractive pricing of JioPhone Next makes it a popular entry-level choice, Vodafone's struggle to retain customers may finally collapse. Even if it can keep the lights on for a while longer, how will it pay for 5G spectrum?

"Private investors are extremely unlikely to save the company, given successive governments seeing telecom capital as something to target," the Deutsche analysts write. The only viable solution for India to keep Vodafone Idea as a going concern "is for the government to convert its debt into equity." The carrier's stock market value of $3.3 billion comes to just over a 10th of the debt. So even with some borrowings written off, existing shareholders will get diluted heavily. But then, they may not get a better deal elsewhere.

The government has so far shown no inclination to get involved, though it has a couple of unprofitable, overstaffed, state-run telcos in a worse spot. Merging them with a nationalized Vodafone Idea could save jobs and precious capital. Managed professionally, it could be a credible third player that can be privatized once the debt has become sustainable.

For better or worse, China's crackdown on its tech sector is seeking to recalibrate the power balance between the state and the private sector. A two-horse telecom race in India will be bereft of any such  grand design. If the third-largest service shuts, and customers scurry off to Jio and Bharti, it's hard to see how India will recoup its payments - or live down the reputation of being the world's most treacherous telecom market.