Opinion: Inflation And Price Rise - You're On Your Own, People

It is cold comfort to be told that the country's Finance Minister Nirmala Sitharaman did not actually say that price rise affected the rich more than the poor. The tweet with her picture and statement went viral and was found damaging enough for the fact-check wing of the government's Public Information Bureau to declare that it was fake news.

▶️ The Claim is #Fake

▶️ @FinMinIndia has not given such statement pic.twitter.com/DpwEWr7DJt

But was it? Another post on social media quotes the Monthly Economic Review Report, published by the Department of Economic Affairs of the Ministry of Finance in April 2022, as stating, "Evidence of consumption patterns suggests that inflation in India has had less impact on lower-income groups than higher-income groups." So certainly this absolutely bizarre and callous approach regarding the impact of inflation is rooted in the ministry run by Sitharaman - whether she said it or not is immaterial, the Ministry she heads certainly believes it.

Prices are rising at a time when jobs, livelihood opportunities and incomes are declining. Recent findings from the surveys conducted by the Centre for Monitoring Indian Economy reveal a most alarming and shocking reality that 17 per cent of households have an average monthly income of just Rs 8,600 in 2020-21. The average earning of around 62% of households was just Rs 14,400 a month. With such low income, the impact of price rise of essential commodities is devastating.

But why blame the Finance Minister for being oblivious to the suffering of the poor? She follows her leader who is several steps ahead. Taking advantage of the wheat shortage globally triggered by the Ukraine war, the government deliberately stopped procuring it from farmers. It kept the MSP low, allowed big traders to step in, procure directly from farmers at a slightly higher price than the inadequate MSP, and make a killing through exports. But since production of wheat was at an all-time low due to adverse weather conditions, especially in Punjab, it created a shortage.

Selling wheat to other countries at the globally high prices can hardly be called feeding the world. But such are the PR abilities of our Prime Minister that addressing a crowd of cheering NRIs on his recent trip to Europe, he declared that India steps in wherever there is a humanitarian crisis; he added for good measure that all this happened in spite of the dismal past record of his predecessors. Meanwhile the shortage in India of wheat led to a big increase in retail prices and a cut of 55 lakh tonnes of supplies in the public distribution system. Far from feeding the world, the government had to beat a hasty retreat, ban exports of wheat, while the prices of wheat flour remain high, forcing families to cut back on an essential part of their diet.

The wheat scandal is just the most recent example of utter callousness. The record increase of around Rs 480 in just one year, in the price of a 14.2 kg cooking gas cylinder to over Rs 1,000 per cylinder, makes a mockery of the much-touted Ujjwala scheme. A most closely-guarded secret of the courtiers of this government is the fact that subsidies for gas cylinders have been stopped by this government for the last two years. Even the most vulnerable sections such as tribal communities have not been spared. In the Special Tribal Component (STC) in budget 2022-2023, the subsidy for provision of gas cylinders to tribal households was slashed from Rs 1,064 crore to just 172 crores. So much for saving rural women from the hard work of fuel collection. Who can afford gas cylinders at this price?

One doesn't have to be an economist to figure that the huge increase in cess on petroleum products, pushing up their prices to a level that is among the highest in the world, is a crucial driver of inflation. The government shores up its revenues to the extent of an average of over Rs 1.5 lakh crore a year over the last four years through cess and taxes on petrol and diesel. Moreover, it uses the cess route since this means that it does not share the revenue with the states. If the government was at all bothered about the impact of inflation, it would have reversed the huge burden of cess and taxes on petrol and diesel. But it is not concern for the poor, but concern for votes, that the government extends. For 137 days before the recent elections to state assemblies, the government put price hikes on petrol and diesel on hold. A few days after the results, the prices were hiked almost every day in a special gift to voters.

Yet another factor is the licence given to big companies to charge what they like. The government has shown its dislike of the law to control prices of essential commodities and had actually legalized price hikes of upto 50 per cent in the new version of the law it pushed through parliament two years ago. It was the farmers' struggle which forced a repeal of the laws, including the dilution of the Essential Commodities price control law. But when it is most needed, the government has refused to act. Take the example of edible oils, the prices of which have seen an unprecedented rise. Through the suffering, some have made huge profits. A recent report reveals that Gautam Adani's company, Adani Wilmer, has increased its revenue by 46 percent, mainly from its sale of edible oils, having captured 20 percent of the edible oil industry. Its profit before taxes saw a jump of 40 per cent. It is this generosity of the government to allow the growth of monopolies in sensitive sectors of essential commodities, and then allow unrestricted rise in prices, that is also a factor impacting peoples lives.

In spite of several efforts to weaken it, India has a strong public distribution system. When open market prices of essential commodities are high, government intervention through the PDS can be an important method of bringing prices down as well as giving relief to the people. Including more items in the PDS at controlled prices is urgently required. It can be done. Kerala is an example.

Kerala has a system started several decades ago when Communist leader EK Nayanar was the Chief Minister. A network of fair price shops run by the government is called "the Maveli stores". There are now around 1,630 of these stores throughout the state. They sell 13 essential commodities for all ration card-holders at much less than the open market. For the last six years, the prices have remained stable. Yesterday, I was in Kannur district to attend a party programme and passed a shop on the road to the village I was going to which seemed particularly busy. I was told that this was a "Maveli store". Curious, I went in - the first thing I saw was a price list. 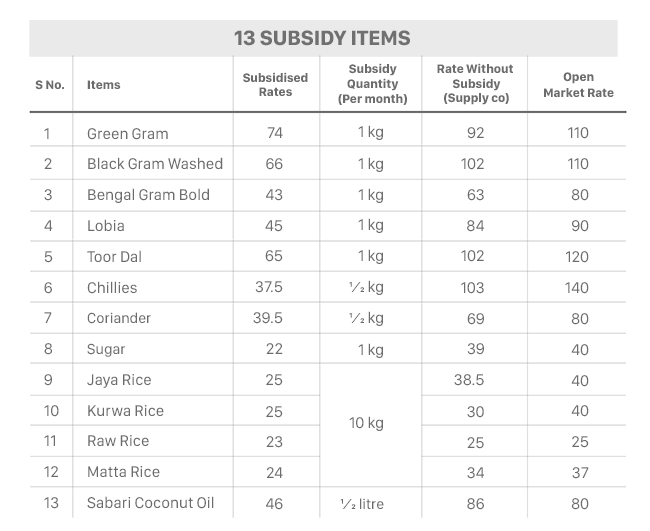 All this is possible because of government intervention, of subsidies, and the concern of the government for the welfare of the people. This is the Kerala model.

When the BJP was in Opposition, it can be seen from the records of parliament, one of the main accusations it made against the then UPA government was that it was responsible for price rise. Press reports of parliamentary proceedings in December 2009 mention how BJP leaders shouted on the floor of both Houses of parliament: "Mehangai ko rok do, varna gaddi chhor do (control prices or quit the government)" - incidentally a slogan it borrowed from the Left. But today in power, when prices are shooting up, the leaders of the ruling regime maintain a deafening silence. Instead, they strain every nerve to divert people with their manufactured divisive slogans.

Opinion: In Gautam Adani vs Mukesh Ambani, The One Pulling Away Is...