Written originally for Tamil daily Dinamani by Tamilaruvi Manian, President, Gandhiya Makkal Katchi. Mr. Manian has been appointed observer by Rajinikanth ahead of his party's launch in January.

One day, upcoming film hero Jeeva and director Subramania Bharathi met me at my home. Our conversation turned to politics. Both urged me to support Rajinikanth if he entered politics.

"Let him first enter politics. Then we shall think about working together" I said. The next day, when a friend met me on behalf of Rajini, I did not agree (to supporting him).

The following day, Rajini contacted me. He told me he would like to meet me. As he wished, I went to Poes Garden to meet him. He welcomed me standing at the entrance. He told me he enjoys listening to my discourses during his morning walk.

He spoke to me for more than an hour. In certain cases, the mind takes to some people in the very first meeting. In some cases, there is no connect despite multiple meetings.

In that one hour, I found myself on his wavelength. There was nothing artificial in his speech. His words have no embellishment. I saw simplicity in him. I felt he speaks the truth, opening up his heart.

He remains someone who applies make-up only in films. In reality, he is someone without any pretense. Zen philosophy underscores there would be no complication in life if everyone remained natural, without any make-up, without concealing their true selves with different masks they put on according to the situations they find themselves in.

Rajinikanth knows Zen philosophy. He reads Osho and Krishnamurti in detail. He has more interest in reading books related to spirituality.

I asked him, "Are you really interested in coming to politics?" He spoke his mind in response. "Sir, I was an ordinary man no one knew when I came to Chennai 40 years ago. I did not even believe I would act in films. I did not have any big dreams then. But soon after I began acting, this Tamil Nadu celebrated me carrying me on its shoulder. All the 'superstar' status, fame, pride, wealth have been given to me by Tamil Nadu. I ought to do something as a mark of gratitude for this".

"Are you coming to politics only to give back with gratitude?"

"Yes. This is the command of my antaratma, an order by the God in whose service I live. I can give monetary help to some. Like we can organise their wedding at my expense. This happens quietly on the side. If I have to do something concrete for the entire Tamil race, there is no way other than politics. Here, the entire system is in disrepair. I'd like to set it right with the people's support". 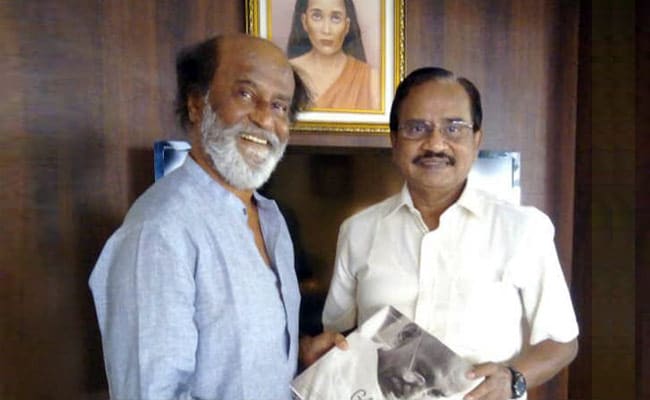 Rajinikanth with the writer

"Sir, it's the two Dravidian parties who destroyed the system. To liberate Tamil Nadu from the clutches of these two parties - this is my wish. And it is my wish that you should not ally with either of them," I said.

"Certainly, I will never make that mistake. You can trust me. But one thing - I don't like to turn back towards the past. I can't consider anyone my enemy. I believe positive energy is essential in politics. Even if others start strongly criticising me, I will not work against them".

This remark caught me by surprise. He shot up in my estimate. In politics, how is it possible not to react or respond to others? Haven't I been responding to every mistake over the last 50 years?

For that, Rajini gave an answer I did not expect. "Are people unaware of mistakes made by those in power? Do you think that they need you to point out that things get done only if you offer bribes? Why should we assume that people have no information? I think it's enough if I explain to people just what I will do and deliver. I believe this is the first step for the alternate politics that you speak of."

"Sir, I am someone who worships Kamaraj at the level of God. If you get an opportunity to sit in power, my wish is Kamaraj rule should be revived".

"Sir, why should we stop with Kamaraj? Let's prepare a list of benefits the downtrodden received during the tenure of Anna, Karunanidhi, MGR and Jayalalithaa. Let's also list what those who succeeded Kamaraj failed to do. Let's revive the good schemes they had created".

"I don't have a different opinion on this. Please do it that way, sir. Kamaraj's rule noble, entirely people-centric," I said.

"I've learnt that corruption-free rule and transparent administration were the hallmarks of Kamaraj rule. It is only because I want Tamil Nadu to have these that I'd like to launch a party. I would be happy if I'd get your cooperation".

"I will certainly stand with you. So do you have any dream project?" I asked.

"Inland water bodies ought to be first linked. Peninsular rivers ought to be linked with the centre's help to fulfil Tamil Nadu's water requirements. We can't rely forever on the Cauvery alone. If we link water bodies in the state, we can save 130 TMC water that goes into the sea."

When Rajini said, "We should focus on this first, water is the source of agriculture and agriculture is the source for our life", my eyes opened in surprise. Is it really he who is a newcomer who doesn't know much about politics?

The first meeting was over. Rajini saw me off in person, as is his custom for all visitors.

When I entered the Poes Garden house, I saw the actor Rajinikanth. When I bid goodbye, I felt I was leaving a special person.

So far, I have met Rajini at least 20 times. Poet Avvaiyar explains how she was in awe of King Adhiyamaan's hospitality. I've learnt by experience that Rajini in each encounter at home is as hospitable as the very first time.

The humility Vaishnavism teaches is naturally with Rajini. In the Mahabharata war, Paranthaman who brought victory for the Pandavas, washed and fed his horses himself during the 18-day war.

Lord Jesus washed the feet of his disciples and wiped them with his robes. The Prophet too collected wood himself for cooking during travel. When Ramanuja's guru, Nambi, welcomed him on the Tirupathi hills, Ramanuja said "You could have sent someone small". Nambi said, "Since there is none smaller than me, I came myself".

"I regard myself as dust" said Mahatma Gandhi. All divine qualities branch out from the root of humility. The scriptures say, "Those with love have everything".

Rajinikanth has love and humility as his chief qualities. I believe there will a good political change in Tamil Nadu. He is the last hope in my political life.