When naming his telecom foray in 2016, Mukesh Ambani chose the mirror image of OIL, the commodity that has made him India's richest man. In hindsight, Jio was a good choice. The week that oil prices turned negative, the refining tycoon won a $5.7 billion investment from Facebook Inc. for his digital assets, Jio Platforms Ltd. Like his wordplay, the performance has proven the opposite of the original.

The 10% stake values the business at a 47% premium over the $45 billion estimated last year by CLSA Ltd. That appears rich, considering that Ambani has yet to demonstrate how he's going to make money from his 400 million telco customers - roughly the same number that Mark Zuckerberg has in India for his three main offerings: Facebook, WhatsApp and Instagram.

But as we've said before, Ambani's strategy has three connected elements: carriage, content and commerce. Jio charges practically nothing for voice calls, and little for data. Prices will rise now that Jio's aggressive entry is effectively turning the fragmented telecom market into a duopoly. Still, it's unlikely that Indians who came online only because Ambani made it affordable would be able or inclined to pay much for JioTV or JioCinema.

That's where "phygital" commerce - the combination of physical and digital retail that Ambani is piloting - might have the biggest appeal for Zuckerberg. As Facebook says, the deal would bring together JioMart and WhatsApp to enable people to connect with businesses. A validation of this thesis is under way, as the 30 million neighborhood stores Ambani wants to link up with JioMart prove their value to society during one of the world's harshest coronavirus lockdowns. The mom-and-pop stores that rule Indian retail are keeping people fed. Online commerce, which has only a sliver of the market, is practically frozen. 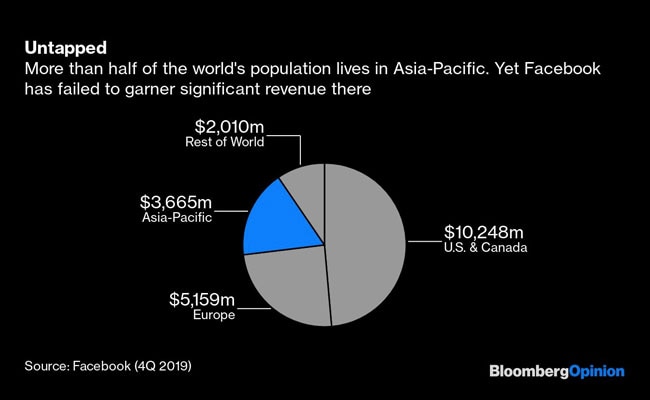 Four years ago, Facebook Inc. was keen to dish out free internet service to India's 1.3 billion people. Zuckerberg thought he was being charitable by offering a low-bandwidth entry to those on the wrong side of the digital divide to join the 21st century. Critics and the Indian government saw it differently. The so-called Free Basics service looked like a walled garden, with Facebook the tallest tree.

Zuckerberg's naive view was that India wouldn't be able to compete with the internet-centered economy of China if it was hamstrung by high data costs. If people couldn't afford to get online, especially in rural regions, how would they transact digitally?

Beyond this grand altruistic gesture stood a need: expansion. While the U.S. and Canada account for around 10% of Facebook users, they contribute almost half of revenue. The social media empire needs new markets to keep growing. Despite learning Mandarin and making multiple trips to China, the world's biggest market remains out of Zuckerberg's grasp. India is the next best thing, especially now that Ambani has made it accessible by forcing down data charges and offering cheap handsets and services in Indian languages. 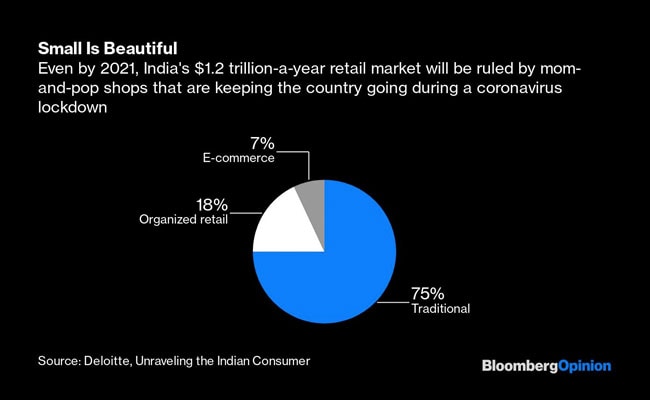 A recent article in news website Morning Context names Michael Grimes, the global co-head of Morgan Stanley's technology investment banking, as the prime mover behind the Jio-Facebook deal. Grimes has the ability to "create something out of nothing," the article quotes an unidentified telecom analyst as saying. (Morgan Stanley was the financial adviser on the transaction, Jio's parent, Reliance Industries Ltd. said in a press release.)

But while the investment is expensive, Jio isn't all fluff. Customers in China and Indonesia have shown a preference for superapps, which allow people to interact with an umbrella brand for everything from chatting with friends to booking cabs and managing money. Ambani could be best-suited to try the model in India, especially if he gets to build it around the popular WhatsApp.

The pandemic may also be forcing Ambani to reassess his options. The deleveraging he promised investors last August after a seven-year, $100 billion investment spree is more easily achieved with Facebook's cash than the planned sale of a stake in his refining and petrochemical operations to Saudi Aramco. With the oil glut unlikely to reverse soon, the mirror image of OIL appears more like the real thing.