Budget Will Be Tougher Than Government's Usual Fiscal Trapeze

India's federal budget Monday will be a much tougher balancing act than New Delhi's regular annual fiscal trapeze. For one thing, the pandemic has upset business-as-usual calculations of how much to spend, on what, and how to finance it. For another, an impatience to make up for lost time has to be weighed against a shrinking of policy space in emerging markets: A reprise of the 2013 global taper tantrum could compound the country's considerable domestic challenges.

On the first question - how much to spend - Finance Minister Nirmala Sitharaman must simply do a lot more. Even with some loosening of the purse strings in the final months of the fiscal year that will end in March, Moody's Investors Service affiliate ICRA Ltd. expects annual government expenditure to have been broadly unchanged from the 30 trillion rupees ($415 billion) estimated before the outbreak.

The answer to what to spend on is being dictated by the fault lines that opened after India imposed one of the world's harshest lockdowns. Without a safety net for workers badly affected by Covid-19, ongoing economic revival from the June quarter's 24% loss in real output could peter out for lack of demand.

A combination of stepped-up social spending - including on long-neglected healthcare - and a state-led infrastructure push will make the recovery both durable and inclusive. A fifth of the 70 million-plus Indians who lost their services, manufacturing and construction jobs are either still working as farmhands or are unemployed. Discouraged, many have exited the labor force. They need income support. But where's the money? Taxes are due a rebound. Together with government asset sales - such as listing state-backed Life Insurance Corp. on the stock market - they can help narrow the combined federal and state deficit to 8.5% of gross domestic product next fiscal year, from around 12% now. It means that the bond market will still have to cough up more than households' pre-Covid annual financial savings. (The post-lockdown surge in thrift was temporary, a result of people not being able to consume.)

The central bank will be reluctant to buy government bonds by the truckload from banks and make a record glut of rupee liquidity worse. While inflation in India is expected to slip to 4.55%, from 6.3% estimated by economists for the current fiscal year, global inflation expectations are hardening.

That's why it's important for Sitharaman to keep an eye on the Federal Reserve. As inoculation in the U.S. gathers speed, officials may turn more confident about the need to start trimming their asset purchases in early 2022, Bill Dudley, a former vice chairman of the Fed's rate-setting committee, wrote recently for Bloomberg Opinion. Given the positive correlation between U.S. inflation expectations and Indian bond yields, New Delhi may struggle to keep a lid on borrowing costs.

Even a hint of a sooner-than-expected U.S. monetary tightening could prove to be expensive. Back in the summer of 2013, then-Fed Chairman Ben Bernanke triggered a flight of capital from emerging markets by suggesting a tapering of U.S. money-printing. India was running large current-account deficits, and the dollar financing needed to plug the gaps abruptly stopped. This time around, India's balance of payment is in surplus. Domestic demand is yet to be fully repaired, while foreign capital is rushing in to participate in a liquidity-fueled stocks rally. 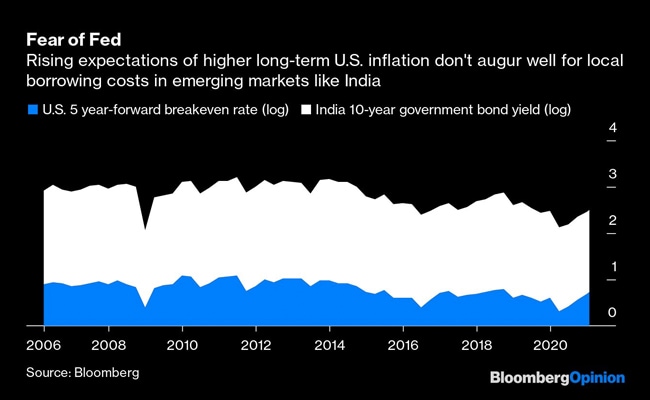 That creates its own problems. The Reserve Bank of India has recently hinted at a preference for buying dollars, adding to its already formidable stash of nearly $600 billion in foreign-exchange reserves. But purchasing the U.S. currency will also add to rupee liquidity. If the RBI tries to mop up too much of it too quickly, short-term interest rates will rise. In a world still awash with cheap cash, that could invite an unwanted deluge of "carry trade" dollars to India looking to profit from extra yield, according to Ananth Narayan, a finance professor and analyst at Observatory Group.

It's a Catch-22. Leave the liquidity glut unattended, and foreigners may chase overpriced Indian equities. Withdraw it, and watch carry traders pile in. Both kinds of speculative bets will eventually unwind, setting the rupee up for a hard fall.

It's important, therefore, for Prime Minister Narendra Modi's administration to not overburden the central bank. Nor can the middle class, which is paying very high fuel taxes, be squeezed further. Protectionist import tariffs on intermediate goods will hurt exporters. New Delhi should instead pluck the low-hanging fruit. Despite surging equity markets, state asset sales have been a washout. Getting deals done and reinvesting the proceeds in new infrastructure would be crucial.

The creaking financial system also needs capital. In the worst-case scenario in RBI's stress tests, 14.8% of India's bank loans might turn bad by September. A decisive cleanup of what's not entirely a new problem might seem like a drag, given the many urgent demands on taxpayers, including for vaccination. But India needs both a healthy population - working, studying and consuming freely - and restored financiers who can support credit while cushioning any external shock. Like a 2022 taper tantrum. If the moneymen keel over, any delicate fiscal balance achieved this year won't endure.

How Rakesh Tikait Has Regained The Upper Hand For Farmers