Prime Minister Narendra Modi has made his first mistake by helping appoint Yogi Adityanath as Chief Minister of Uttar Pradesh. By installing a man as polarizing and malignant as the five-time MP and head of the Gorakhnath Peeth, Modi has told us that the gloves are off. That, just like Adityanath himself promised, the installation of a Hindu Rashtra has begun.

This article isn't about Adityanath. Commentaries and rancorous quotes from Ajay Singh Bisht, which is Adityanath's real name, have filled the virtual and real world since he was elevated to the top job in UP yesterday. "If one Hindu girl is converted, we will convert 100 Muslim girls"; "Mother Teresa was a part of a conspiracy to evangelise India"; "there is no difference in the language between Shah Rukh Khan and Hafiz Saeed"; and most recently, on the eve of this assembly election, he told a rally in Bulandshahar that voters must remember "the rapes and riots" (of 2013 Muzaffarnagar) when they go out to vote.

This article is about Prime Minister Modi himself - what the appointment of the new UP Chief Minister says about him.

All those promises about development, that talk about bridging the chasm between Hindus and Muslims, all that affirmation about gender rights, including those of Muslim women reeling under the weight of the absurd triple talaq - clearly, it was all adulterated, fictitious and synthetic. Did we believe it? Did we want to believe the man who promised us so much in 2014 that we cut across caste and creed and gender - and even religion - to give him a mandate India hasn't seen since 1984? Did we bite our tongue and grit our teeth when the perils of demonetization destroyed our lives, in the hope and belief that our Prime Minister would really empty out the black money jars hidden in caves deeper than Aladdin's and make India a much more egalitarian country?

In 2014, we looked at the tired and decapitated Congress party saying the same old-same old stuff about secularism and povertarianism and decided to give Modi a chance to make a new India. Then, in 2017, when Amit Shah and his cohorts stitched together Uttar Pradesh with brilliant mathematical formulae that took into account the intricate faultlines of caste as well as religion, we admired Modi's hunger in redrawing the state in his image.

Across UP, there was one man whose name the people chanted: Modi, Modi, Modi. 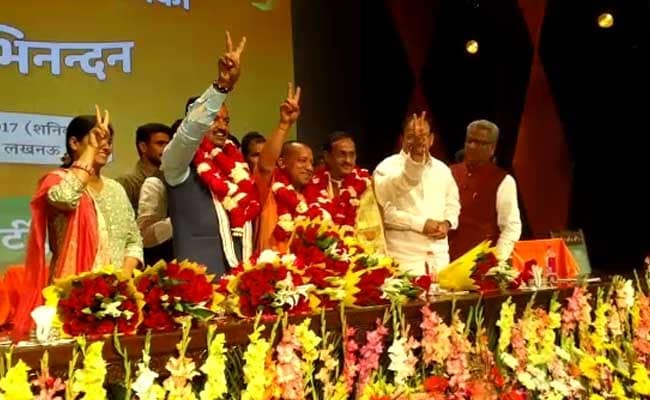 The glue that affixed caste and class and gender together in this UP election and gave the BJP such an incredible mandate was the Prime Minister.

Modi's reputation has soared away and beyond Gujarat in the last two and a half years. He has dealt with world leaders on an equal footing and promised to reinvent India. He has sent tough messages to both China and Pakistan. Again and again, we have applauded his energy, his determination, his drive.

With the elevation of Adityanath, the Prime Minister has shown us what he really thinks of the mandate. There are only two answers to what happened: either Modi agrees with the decision, presumably steam-rollered by the RSS, and went along with it knowing full well that it demolishes his much-vaunted claims of "vikas". Or he didn't.

If he didn't agree but went along with it, propitiating the mother organization which demanded its pound of flesh and blood for helping him win UP - and indeed, India - then we know that the Prime Minister has been defanged in his hour of victory.

To be sure, every political party has its Adityanaths, although few are as virulent as him. A cadre-based party like the BJP certainly needed the muscle the Yogi wields across the Poorvanchal. He was a star-campaigner both in the 2014 and 2017 elections. RSS and BJP leaders admitted, in the wake of the 2014 victory, that UP was won on the "reverse communalization vote. We didn't need the Muslims. We won on the strength of the Hindu vote."

This was also partially true in the recent UP Assembly elections. But the drive for Hindutva, the collapse of the OBC and Dalit vote in favour of the BJP, only happened because Modi was at the helm.

The morning after the decision, though, Modi will hopefully see what he has done. He probably thinks he can control Adityanath - the man seemed suitably chastened by all the garlanding and sweet-eating on TV yesterday. Question is if Adityanath will allow himself to be controlled by anyone else. His Hindu Yuva Vahini promised to demolish several BJP candidates in this assembly election, until the Yogi put a stop to it.

Certainly, the PM's belief in his own Raja Harishchandra-like reputation is at stake. By allowing the most fundamentalist and extreme strains of Hindutva rise to the top of the BJP in this "UP-manthan," the PM has shown the limits of his own power.

As for the rest of the world, Adityanath's elevation will force it to relook at the PM with new and troubled eyes. BJP leaders can point towards Donald Trump and laugh off the accusation that the gloss is finally off - but there's no denying the fact that in the US, the political opposition, the judiciary and civil society are fighting the US president's crazy attempts at reinventing that nation.

Certainly, the appointment of the new UP Chief Minister is a fundamental new moment in Indian politics. If the opposition can push itself to rise from its slumber and cast an eye on the horizon, it might get its act together. Modi will of course do his best to let Kumbhakarna sleep. The thought of awakening it could comprise the next big battle of ideas.

By the time 2019 dawns, the big question will be - has Modi bitten off more than he thought he could chew?