What does the new normal look like in a world where some people are vaccinated and others aren't? One answer to that question may be found in places that have managed to control covid-19 transmissions and were inching back to business as usual even before vaccines were deployed - places such as New Zealand, Australia, Taiwan and my home country, Singapore, where I spent the past five weeks.

Since last March, Singapore has imposed strict quarantine rules, mandating that all travelers into the country, including citizens like me, must quarantine, most commonly in hotels for 14 days. Soon after, it launched a lockdown that involved closing nonessential workplaces and schools and restricting gatherings. As community transmissions dwindled, the government began relaxing measures, allowing workplaces to reopen with limited capacity and schools, malls and other public spaces to operate with preventive measures in place.

Singapore now sees just a handful of locally transmitted covid-19 cases each month. Though there have been multiple outbreaks in crowded facilities housing migrant workers - revealing the stark inequalities that underpin Singapore's development and leading to continued restrictions for these vulnerable communities - in the past week, there have been just 11 positive cases found outside quarantine. In total, just 30 people have died of the coronavirus in Singapore.

Yet the country has not allowed itself to become complacent. Even as more than 2 million vaccine doses have been delivered to a population of under 6 million, the pandemic informs almost every aspect of daily life.

Early on, the government deployed a phone app for contact tracing. To enter any building or crowded space, everyone must scan a "SafeEntry" QR code to "check in," and then "check out" when they exit. Attendants sit near each entrance to help those without smartphones and ensure people are following instructions, but I didn't see anyone push back against the process, which typically takes a few seconds. In malls, every store has its own QR code, and every entrance comes with a temperature scan and sanitizing station. It is mandatory for people to wear masks outside their homes, with a few exceptions, such as when exercising.

These precautions have allowed Singaporeans to continue to take part in activities that feel unthinkable - or at least unwise - in the United States. Movie theaters are open, with temperature checks, QR codes for each hall and socially distant seating between groups. Food courts and hawker centers continue to attract crowds for indoor eating, and thousands of "safe distancing ambassadors" have been employed to remind customers to follow rules. Attractions such as the Singapore Zoo and River Safari are also open; signs near the exhibits warned visitors to use hand sanitizer and stay back to keep animals and other visitors safe. Even fitting rooms in stores remain open, though retail staff commonly disinfect clothes before returning them to shelves. 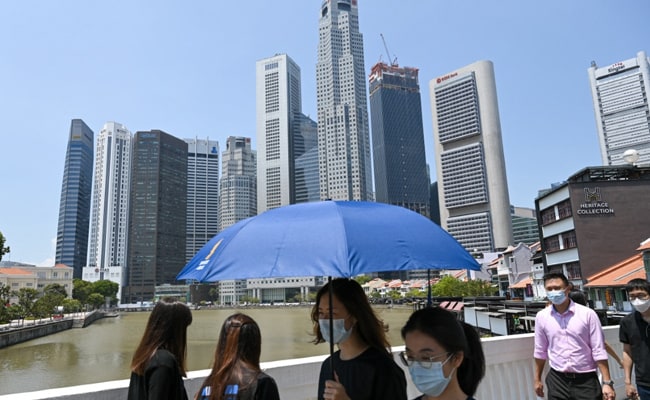 People walk along a bridge next to the financial business district in Singapore.

Like everywhere else, Singapore has grappled with costs from the pandemic. When I landed in Singapore in March, Changi Airport's usually bustling retail space was dark and deserted. Singapore Airlines, at the heart of the country's travel hub status, laid off about 20% of its staff and even sold in-flight dining experiences to travel-hungry locals. Chinatown Street Market, which bustled with bargaining street vendors and tourists, now sees just a few dozen pedestrians in peak hours, when there used to be hundreds. Mustafa Centre in Little India, the department store my relatives would visit for everything from watches to medicines to televisions, no longer operates around-the-clock. In Mass Rapid Transport trains, passengers are warned not to talk to decrease any chance of transmission. And signs advertise "staycations" for locals to fill the unmet demands of its hospitality industry.

In fact, signs of the new reality are everywhere, minus one ingredient: fear. Because Singapore's caseload is so low, residents are able to continue their lives without the overarching terror of contracting or spreading the virus.

No country has had a perfect pandemic response, and Singapore's strategy comes with its own concerns. Nor is it easily replicable elsewhere; the country benefits from a small, compliant population, and its island status allowed it to seal borders effectively. But Singaporeans understood something important about the pandemic early on: that to achieve a semblance of normalcy, we'd have to give up the dream of returning completely to normal, at least until everyone was vaccinated. It was clear that the alternative, in a densely populated urban jungle with an aging population, would be devastating. That attitude has kept us safe - and has lessons for the world.

Though vaccinations are ramping up, the government has no plans to jettison the quarantine and contact-tracing policies just yet, though it is in talks to create "travel bubbles" with other low-risk countries. Singapore shows it's possible to find a middle ground between lockdowns and carelessness - and that it's important to not let our guard down as transmissions decrease and we begin to feel safer, particularly as new variants emerge. But after a year of confusion and ineptitude, will people finally learn?

(Mili Mitra is an editor for The Washington Post Opinions section)

This Covid Disaster Could Have Been Prevented - by Yashwant Sinha