Zomato Takes A Dig At Elon Musk With A Hilarious Spaghetti Meme: "Twitter Before And After'' 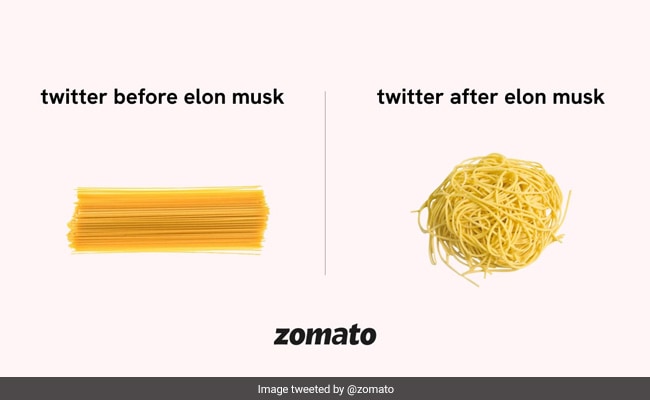 Billionaire Elon Musk has been facing a barrage of criticism for the way he is handling things at the Twitter office. From confusion over the blue verification badge, to ruthlessly firing employees, controversies at the Twitter headquarters refuse to die down. Needless to say, the dramatic developments have given social media users enough fodder to poke fun at the Twitter boss. Social media websites have been flowing with memes and jokes, as users speculated whether the platform will survive amid all the recent changes.

The post is aptly captioned "Namaste'', with a folded hands emoji, which again is a subtle dig at Mr Musk's recent tweet, wherein he urged those critical of his handling of the microblogging site to stay on other platforms. "Hope all judgy hall monitors stay on other platforms - please, I'm begging u," he wrote. He had concluded his message by tweeting 'namaste'.

Since being shared, the post has received more than 1300 likes and close to 80 retweets. The tweet is swiftly going viral, with many posting funny replies, while others expressed their thoughts about the current Twitter situation. Continuing the meme game, one user jokingly wrote, ""When I was kid" and "when I was grown up".

Another user posted a picture of khichdi, and captioned it as, "Simple khichri vs Twitter Khichri.''

'A third said, "good one Zomato,'' while others posted laugh emojis in response to the tweet.  A fourth joked, "Elon musk planning to buy Zomato after this tweet.'' Another had a smart reply to the meme. He wrote, "Zomato, you mean, elonmusk dded more flavours and colours to something that was raw, bland and uncooked?