Millions of views for these fake tiger prank videos. 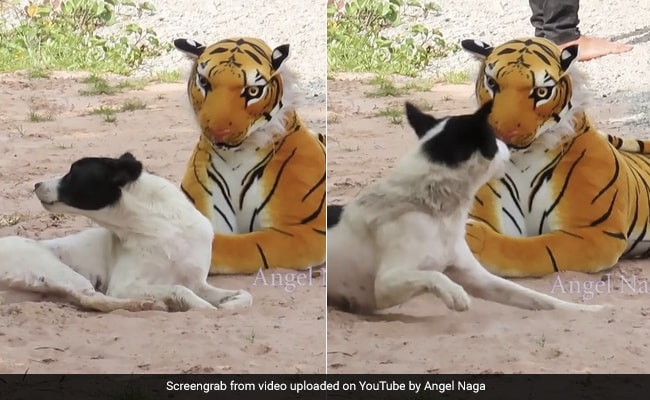 Here's how animals react to a fake tiger.

A Thailand-based YouTuber has earned a huge following with videos that show him pranking animals with a stuffed tiger toy. Videos that have registered millions of views each on the video streaming platform show him placing a fake tiger next to unsuspecting animals and filming their reaction to it.

In most cases, the animals are startled by the fake tiger, jumping up and running away quickly from the apex predator. In some cases, however, dogs fight back by barking furiously. From the videos, it appears as if the YouTuber apologises to the animals he has pranked by feeding them afterwards.

The fake tiger prank videos have been uploaded on the YouTube channel 'Angel Naga'. In one video, shared four days ago, the YouTuber pranks monkeys and dogs with his tiger toy. From jumping up, spooked, to running away quickly, here is how the animals reacted:

The video has gone viral with a whopping 4 million views on YouTube and has been widely circulated on other social media platforms as well, collecting hundreds of amused comments.

In another clip, shared just a day ago, cats, along with dogs, become the target of the prank - although one brave little kitten was filmed following the 'tiger' curiously instead of running away (skip to the 0.38 mark to watch).

This video has been viewed over 2 million times on YouTube.

Several people flocked the comments section to say they found the videos hilarious, while others wondered how the urban-dwelling animals learnt to be afraid of tigers.

"Some of these animals have never seen a tiger let alone a big cat. So their reaction must stem from instinct when their ancestors dealt with such threats constantly," wrote one person.

"Nah clearly fake, those monkeys and dogs were paid actors," another quipped, while a third said, "I love to watch end part after funny moments... thanks for feeding them."