As 2017 winds down, it's time to rewind and remember the most viral moments of the year. Scroll down to watch YouTube Rewind 2017. 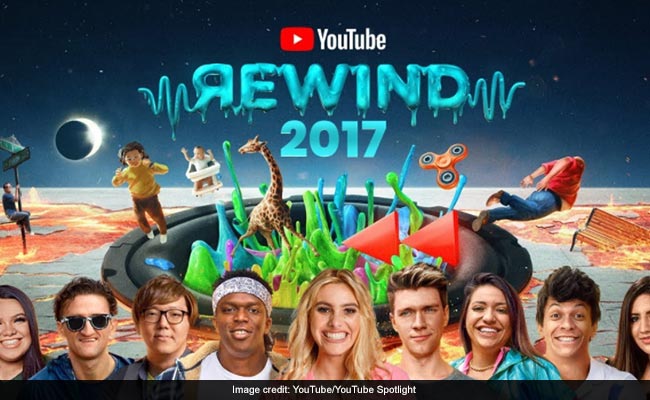 New Delhi: It's that time of year again! As 2017 winds down, it's time to rewind and reminisce about the most viral moments of the year. YouTube released its annual YouTube Rewind video on Wednesday and in less than 24 hours, the nostalgia-inducing mashup of 2017's top trending and viral videos has been viewed over 26 million times already. In fact, it's among the top trending videos on YouTube today. The video features appearances from India's BB Ki Vines, vlogger Shruti Arjun Anand and comedy collective AIB. From fidget spinners to slime, Despacito to Shape Of You and even the cute kids who crashed their father's interview on the BBC, this video has it all.

So, what are you waiting for? Relive the year that was with your favourite YouTubers. Scroll down to watch YouTube Rewind 2017.

What is YouTube Rewind 2017 and why is the video trending?

YouTube Rewind 2017 features all the top trends of the year gone by. From the videos that topped trending lists, the music you played on loop (there's a reason the video is titled "The Shape Of 2017"), your favourite toys, gadgets, memes and, of course, the YouTubers that kept you streaming video after video.

At a little over seven minutes, YouTube Rewind 2017 packs in everything from a colourful slime fight (in case you were wondering, slime oozed all over YouTube this year with two million different uploads) and fidget spinners (the must-have toy of 2017) to "The Floor Is Lava" and "Spicy Noodle" challenges.

What are some of the viral videos included in the YouTube Rewind 2017 video?

There are almost far too many viral moments to keep a track of in YouTube's compilation but here are five of our favourites:

Who are the Indian YouTubers featured in YouTube Rewind 2017?

The video features appearances from India's BB Ki Vines, vlogger Shruti Arjun Anand and comedy collective AIB. Also making appearances are Indian-origin YouTubers like Superwoman Lilly Singh and vlogger Kaushal Beauty. And because we love them so, we're including Liza Koshy and Safiya Nygaard who are both half-desi in this list.

Still reminiscing about the year gone by? Check out the top 10 trending videos in India this year.Click for more trending news