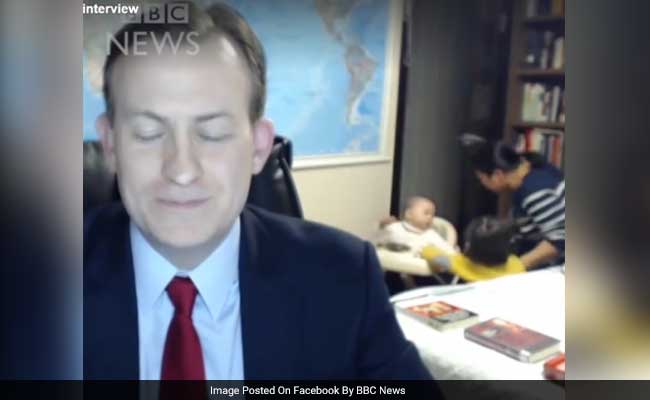 Oh, Robert Kelly. We've been there. All of us, and many of us more than once.

The evolution toward more flexible work schedules, and the ability to work from home, can be a lifesaver. It can also totally sink people who are trying to maintain some sort of separation between what passes for a professional persona and the 24/7 business of parenting.

Kelly, a professor and an expert on international relations, found himself struggling with domestic matters this week when, during a Skype call to discuss South Korea with BBC One, his two children burst in behind him. Hilarity ensued, and a woman frantically dashed in to retrieve the kids. The video has gone viral, in part because who can't relate?

Former Washington Post colleague Frank Ahrens shared the video on Facebook and quipped "Pro tip: If you're doing a video interview at home and have small children, lock the door." Ahrens, the father of two girls, including a 4-year-old who is very interested in her daddy's activities, said later in a message that he quickly realized a lock wouldn't work.

"I have come this close to the same thing happening to me in academic interviews and client video calls, but thankfully never on a global media platform, like this poor chap," Ahrens said. "At first I thought it was a no-brainer that he should have locked the door, but then I realized what would happen in my case if I locked the door: (pounding) 'Daddy! Daddy! Who are you talking to? Daddy! Can I have my orange juice?!' (more pounding). Pick your poison."

"This has happened to me several times," said Kristin Shaw, who posted an anecdote about her own trials on Facebook, linking to the video. "Just the other night, I was on a video conference with a client at about 9 p.m. and suddenly he stopped and said, laughing, 'There is a child behind you.' "

Shaw's 7-year-old son was standing behind her, staring, waiting for her to acknowledge him. After her client spotted him, her son insisted on saying hello. And so they waved to each other and "I shuffled my little one back to bed."

Audrey Murphy, a Manassas, Virginia, resident and mom of twin boys said that once, when she was on a call with the vice president of her company, the boys demanded to know if he had a dog and a pool. When he said yes, Murphy said, the boys invited themselves over for a play date.

Jennifer Carstens, a mom of one in Woodbridge, Va., worked from home doing medical transcription when her daughter was young. She found that she couldn't get anything done while her daughter was awake, so she would be up working until 3 a.m. some nights. Who needs sleep anyway?

And it's not limited to human kids; pets can cause awkward moments as well. Susan Lacefield, a mother of two who works from her home in Massachusetts, was on a conference call with a couple of co-workers once when her cat, who was sitting under her chair, started loudly hacking up a fur ball.

"There was a couple of minutes of uncomfortable silence until I explained what was happening," Lacefield said in a message. She said she purposely schedules interviews for when her kids aren't at home or makes sure her husband is around to run interference.

Some parents go into those work-from-home days with a strategy all mapped out. Mari-Jane, who is one half of The Post's On Parenting blog, and her husband write down a dozen or more activities on strips of paper, then have the kids, now 12 and 10, draw them out of a hat periodically throughout the day to keep them occupied. Sadly, it's only moderately effective at keeping the howling and haranguing to a minimum.

We've seen neighbors locked in their cars on conference calls while the kids played nearby with a sitter. Amy, the other half of On Parenting, has on many occasions reassured people she's interviewing that she doesn't mind the crying kids and barking dogs on the other end of the line because hey, she's interviewing them about parenting, right?

Of course, there are cringe-worthy moments in that video. The attempt at brushing the kid aside and assuming no one would notice (perhaps). And the mortified caretaker in the background, embarrassingly trying to get the kids out of the room. We wonder how things are going in that household right now.

Promoted
Listen to the latest songs, only on JioSaavn.com
Video link:

When live TV goes wrong... This BBC guest's children become the stars of the show.