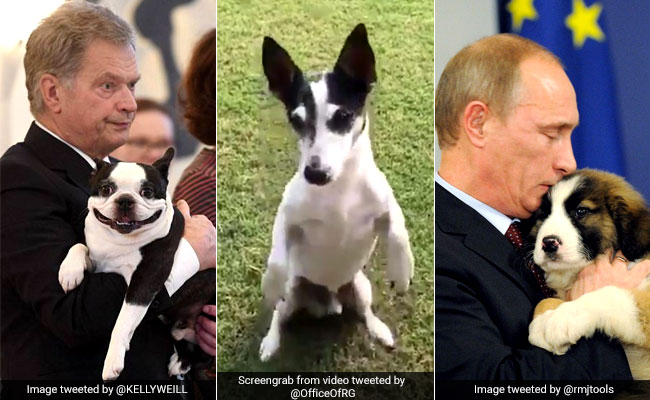 Lennu, Paddles and Buffy (from left to right)

They are equal parts regal and adorable. They are animals in high places. This is the fluffy world of the most powerful first pets from across the globe: a distinguished and exclusive club of political pets with better lives than most humans. The world looks up to their humans but their humans bow down to these cuties.

Pidi Gandhi was introduced to the world through a video that went viral on Sunday. The clever little dog with his biscuit trick remained the top trend on Twitter all day, as many made memes and others asked for Pidi to get his own Twitter account.

excuse me but are you aware of Lennu, the Finnish president's dog pic.twitter.com/sBVSOiExw6

In other news, The Finnish President's dog Lennu is 1000x more presidential than our soulless circus peanut. pic.twitter.com/7mh5Dw19yF

The first felines of Malaysia

Malaysia's Prime Minister Najib Razak is also the proud human of the fluffy foursome of Leo, Kiki, Tiger and Simba.

Larry - the Chief Mouser of the Cabinet Office in UK

Perhaps the most famous political pets are UK's 10 Downing Street cats - a position that Larry has held since 2011. Larry has seen one Prime Minister change during his tenure but his spot in 10D has remained intact. Besides catching pesky mice, Larry's duties include testing antique furniture for napping quality.

All Press to remain behind barriers.
All cats to go wherever they like. pic.twitter.com/IsYXpRtkfA

The newest kid on the block is Paddles - New Zealand's tech-savvy first pet with a Twitter account full of savvy tweets and paws with opposable thumbs. Paddles belongs to the Prime Minister of New Zealand Jacinda Ardern.

Hi, I'm Paddles and I am the First Cat of New Zealand. I have opposable thumbs, I'm purrty special. pic.twitter.com/MPkxdhWCRu

Thanks Mum for bringing me out so I can speak to the press. Must give the people what they want - and what they want is me. Prrrrp pic.twitter.com/uiA1jk3qeN

The first dogs of Russia

Vladmir Putin, the President of Russia, is a well-known dog lover. At present he is the proud owner of Verni, Yume and Buffy. Verni, a top breed alabai, was a gift from Turkmenistan's president.

Dog day as Putin plays with pets in the snow (PHOTOS) http://t.co/vOojClNSOOpic.twitter.com/Gys4Zr2z3R

The President of Taiwan, Tsai Ing-wen, has two adorable kittens - Think Think and Ah Tsai. During her presidential campaign, the press sometimes referred to her as the Cat Lady.

The first pets of South Korea

Promoted
Listen to the latest songs, only on JioSaavn.com
South Korea's president Moon Jae-in has been praised for adopting a rescue dog, Tory. He is also the proud human of another dog, Maru, and a cat named Jjing-jjing.

The black labrador-griffon mix may recently have peed on an ornate fireplace at the Elysee Palace as Emmanuel Macron attended a meeting, but we love him anyway.

One Thing That Scares Olympic Medallists? Find Out In This Rapid Fire Round