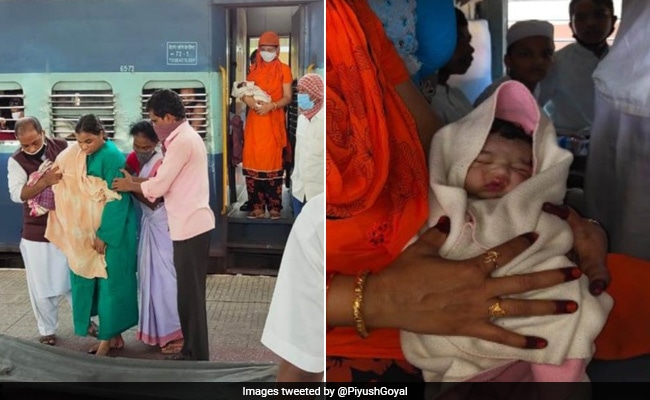 A baby boy was born on a Howrah-bound Shramik Special train.

A woman gave birth to a baby boy onboard a Shramik Special train on Wednesday, Railway Minister Piyush Goyal announced on Twitter. Sharing photos of the mother and the newborn baby - who was seen swaddled in a blanket and surrounded by passengers on the train - Mr Goyal said that the mother had a safe delivery with the help of Railway doctors. The birth took place on a Secunderabad to Howrah Special train, he added.

According to Prameya News, the woman - identified as 32-year-old Saira Fatima - began to experience labour pains near Khurda Road station in Odisha on Wednesday morning. Alerted to the situation, Railway authorities halted the train and a medical team arrived to assist with the delivery.

An ambulance was later arranged to transport the mother and baby to a hospital, where they are both doing well.

"Railways welcomes a cry of joy as a heathy baby boy takes birth aboard the Secunderabad-Howrah Special train," Mr Goyal, 56, wrote on the microblogging platform. "With the help of Railway doctors and medical team, the mother safely delivered her baby."

With the help of Railway doctors & medical team, the mother safely delivered her baby???????? pic.twitter.com/R78yvZ1iPA

According to a report released last month by news agency PTI, more than 30 children were born onboard Shramik Special trains since the beginning of May.

Whenever a passenger needs help, the onboard staff alerts the station where medical aid is available and the doctors who live in railway colonies around the station are always there to deal with any emergency, a Railways spokesperson said.

Shramik trains were started on May 1 to help migrant workers, stranded in different parts of the country amid the coronavirus-induced lockdown, reach their homes. On Monday, Mr Goyal announced that the Railways had run more than 4,500 Shramik Special trains to move over 75 lakh migrants.