The boa constrictor weighs about 10 kgs 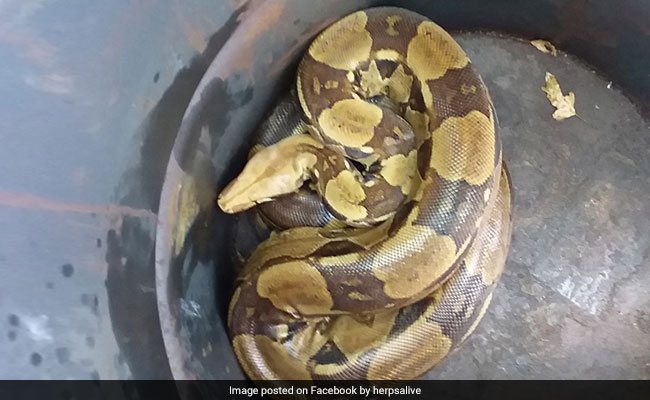 A picture of the boa constrictor was shared by Herps Alive reptile rescue centre.

A woman in Brecksville, Ohio, received a huge shock when she stepped out on her lawn and found a 7-foot boa constrictor there. The incident occurred on Monday afternoon, surprising both police and neighbours. According to Cleveland 19, the woman called Brecksville Animal Control and a crew arrived to capture the snake.

The 7-foot boa constrictor was so large and heavy, it left a visible path near homes on Chapel Hill Road and flattened grass, reports Fox 8.

"On my driveway, it took up a whole slab. I thought that's pretty large," said Meredith Black, whose sister first saw the boa and called police, to Fox 8. "She said I think something's in its belly too."

Animal control officers needed a large barrel to wrangle the snake. It was then brought to Herps Alive Foundation - a non-profit reptile rescue in South Euclid. Herps Alive shared a picture of the boa on their Facebook page:

According to Keith Gisser, executive director and founder of Herps Alive, the boa weighs about 10 kgs and is between 6 to 10 years old.

"I believe the snake either got too big, or the owner couldn't take care of her for some reason and rather than making a few phone calls chose to release the animal," said Mr Gisser to Fox 8.

In July last year, a New York man received a rude shock when he was woken up by a 6-foot boa constrictor falling on him.

Boa constrictors are one of the largest snakes in the world. Their name comes from their preying habits - they strikes at the prey before constricting it till death.