It all started when a woman in Poland's Krakow called the animal welfare society in panic. 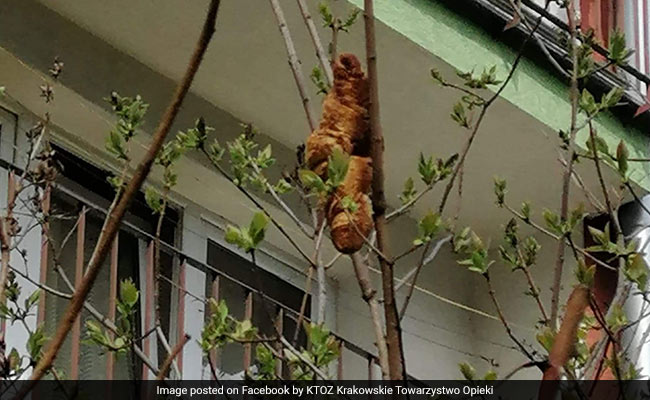 A "dangerous looking animal" in Poland turned out to be something quite different.

The life of animal rescuers can be full of unexpected, dangerous and exciting revelations. Recently, some rescuers in Poland had no idea what was in store for them when they were called in to tackle a 'dangerous looking animal'. The creature had been perched on a tree for days. Expecting to face a beast that would test their skills, the team reached the site only to see a good old croissant waiting for them. Yes, you read that right.

It all started when a woman in Poland's Krakow called the animal welfare society in panic. She told them that an animal had been on a tree in the area for days and was not budging, reports The Independent. Due to this, residents were unable to open their windows, lest the creature should enter their homes.

When the staff suggested that it could be a bird, the woman said that it looked more like an iguana. A post by the organisation on Facebook this Wednesday read, "He's been sitting here for two days and everyone is scared of him! So when are you coming for him?" she asked in an agitated tone.

The inspector, who is identified as Adam in the post, suspected that it could be an abandoned pet left to die in the open. Explaining that this was a common phenomenon, he wrote, "We had an old Yorkie thrown into the yard in the evening, a seriously ill cat left in a closed transporter in a dumpster carport in winter, rats and hamsters with a cage thrown in the rubbish, even fish in a street bucket."

Referring to the unidentified animal, he added, "Maybe he's sitting in that tree and not moving because he just died?"

Soon, the team reached the area in question and with some help from the complainant, identified the tree. Explaining what happened next, the official wrote, "Suddenly... Here he is, got him! The brown creature is sitting on a lilac branch...The creature sits and doesn't move - exactly as the notifier described us. His brown skin shines in the sun. We are looking more closely now. The poor guy has no legs or head."

The officer, however, was quick to reiterate that such incidents must not discourage residents from reporting usual sightings and concerns.

The post has spread like wildfire on the social media platform. Till now, it has garnered more than 7k likes and close to 2k shares.