Why Russia's Vladimir Putin Took A Dip In Icy Water, Wearing Nothing But Swimming Trunks

Russian state television broadcast footage of Putin, with the air temperature at minus 14 Celsius (6.8 Fahrenheit), removing a sheepskin coat to enter the icy waters 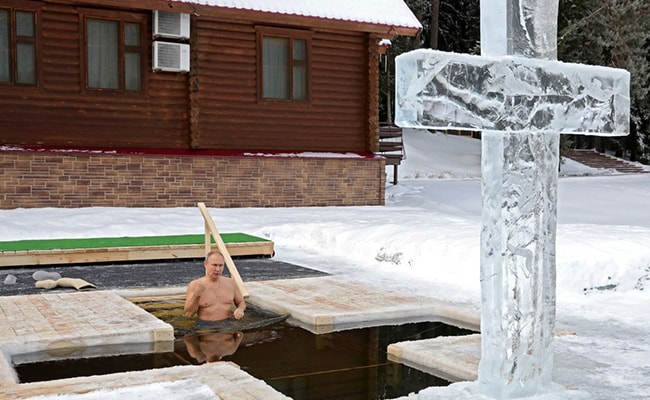 Russian President Vladimir Putin, dressed in nothing but a pair of blue swimming trunks, immersed himself in the freezing water of a cross-shaped pool near Moscow on Tuesday, observing an Orthodox Christian ritual to mark the feast of Epiphany.

Russian state television broadcast footage of Putin, with the air temperature at minus 14 Celsius (6.8 Fahrenheit), removing a sheepskin coat to enter the icy waters and submerging himself three times beneath the surface, in front of an ice-sculpted cross.

Putin, 68, grew up under Communist rule where open shows of religion were frowned upon. As president, he has become a frequent attender of Russian Orthodox ceremonies, and has given the church a major voice in society.

Each year on Epiphany, Orthodox believers immerse themselves in rivers and lakes to commemorate the baptism of Jesus Christ in the River Jordan.