The US Navy wrote about the benefits of yoga while sharing a picture. 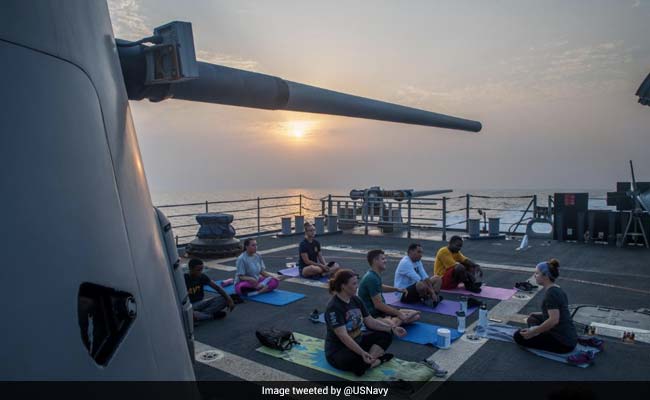 A picture shared by the US Navy on Twitter.

Yoga has gone global in recent years, and the US Navy seems to be the latest in the long line embracing the ancient Indian practice. On Friday, the US Navy, tweeting from their official account, shared a photo which appears to show sailors performing a yoga asana (physical postures) aboard a ship.

The US Navy wrote about the benefits of yoga while sharing the picture, which shows a group of seven people following a yoga instructor, with the sea stretching out in the background.

"Did you know that #Yoga is one of the many ways that Sailors can get their mind and body right at sea to stay Navy fit?" the US Navy tweeted.

Calm before the storm. #Namaste

Did you know that #Yoga is one of the many ways that Sailors can get their mind and body right at sea to stay Navy fit? #FridayFitnesspic.twitter.com/1FiYwQlOSn

Their tweet about yoga has collected over 17,000 'likes' and more than 7,000 'retweets'. Here is how Twitter users reacted to it:

#Namaste , Thanks for spreading yoga 🙏

I love to see Yogi's. Meditation is the key to introspection and control over your emotions. Namaste

It's never too late to try yoga!
If not tomorrow, then next weekend will be great.
Meantime, stay safe and comfy.

According to an October 2018 report published in the Yoga Journal, yoga has become one of the "rising stars" in the US Department of Defense's efforts to mitigate physical and mental health problems among service members.

The ancient Indian practice of yoga has become a symbol and an ambassador of the country's culture around the globe. In 2015, PM Modi persuaded the United Nations to declare June 21 International Yoga Day.