Read inOther Languages
This Article is From Apr 15, 2021

Ritika Sajdeh, Natasa Stankovic and Pankhuri Sharma Pandya were seen sitting together in the stands 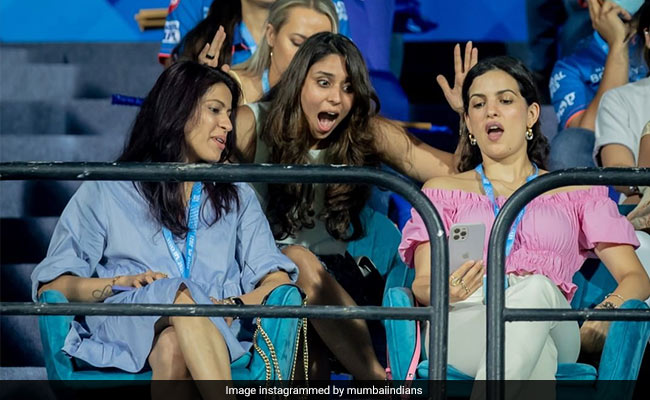 As Mumbai Indians achieved an improbable win against Kolkata Knight Riders (KKR) in the Indian Premier League (IPL) on Tuesday, the wives and girlfriends club was spotted looking very surprised at something. Mumbai Indians shared a photo on Instagram which shows Ritika Sajdeh, Natasa Stankovic and Pankhuri Sharma Pandya sitting together in the stands. Their partners all play for Mumbai Indians.

In the picture, Natasa, dressed in a pink top, was seen holding her phone at such an angle that it's visible to Ritika Sajdeh and Pankhuri Sharma Pandya, who is married to Krunal Pandya. Whatever they saw on the screen left them with their mouths hanging open in surprise.

Mumbai Indians, while sharing the pic, asked fans to swipe left to find out what surprised the trio. Doing so reveals a pic a Rohit Sharma in action during the match. The Mumbai Indians captain is married to Ritika Sajdeh and the two have a daughter named Samaira.

Since being posted yesterday, the picture has collected over 5 lakh 'likes' and hundreds.

"Always great to watch Ro-Hit on the field," wrote one Instagram user. "Her reaction and his bowling," another said.

Mumbai Indians defeated KKR by 10 runs thanks to a spirited bowling performance from the Rohit Sharma-led side.

"We both bowled well. Krunal did not give many runs in his spell. In the last match it was not like this but this time there was help from the wicket for spinners. We will play the main role if we get these kinds of wickets," said Chahar during the post-match press conference on Tuesday.