What Became Of Dilip Kumar's Ancestral House In Peshawar?

Dilip Kumar, born Muhammed Yusuf Khan, grew up in a haveli in the heart of Peshawar city. 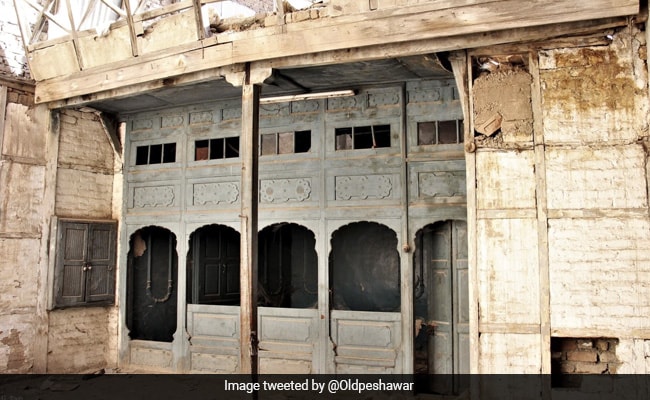 A photo of Dilip Kumar's ancestral house, located in Peshawar.

Legendary actor Dilip Kumar, who died this morning in Mumbai, had often reminisced about his ancestral house in Peshawar (located in present-day Pakistan), where he was born before the partition. Dilip Kumar, born Muhammed Yusuf Khan, grew up in a haveli in the heart of Peshawar city. Located in the fabled Qissa Khwani Bazar, this is the house where Dilip Kumar spent his early childhood before he achieved stardom in the city of dreams. Incidentally, Dilip Kumar's haveli neighboured the ancestral home of another legend of Hindi cinema - his lifelong friend and contemporary, Raj Kapoor. The two grew up in neighbouring havelis that were taken under the possession of Khyber Pakhtunkhwa Directorate of Archaeology and Museums last month and will now be converted into museums.

In 2014, Dilip Kumar and Raj Kapoor's ancestral homes had been declared national heritage sites by the then Nawaz Sharif government. They hit the headlines in September last year after the provincial government announced that it would acquire both properties and turn them into museums after restoration. At that time, Dilip Kumar had received a glimpse of his ancestral house thanks to a journalist in Pakistan.

Journalist Shiraz Hassan had posted four photographs of Dilip Kumar's ancestral house, which is over a 100 years old, on Twitter. The actor thanked him for sharing the pictures and requested other Peshawar residents to share pictures of his ancestral home.

Thank you for sharing this. Requesting all in #Peshawar to share photos of my ancestral house (if you've clicked the pic) and tag #DilipKumarhttps://t.co/bB4Xp4IrUB

Last month, Director (Archaeology) Dr Abdul Samad told Pakistani news outlet Dawn that the Directorate took possession of both properties from their current owners after their ownership was transferred to the provincial government.

"Now, both residences are officially the properties of the Directorate of Archaeology," he said, according to news agency ANI, adding that the directorate would carry out restoration work on the properties before turning them into museums.

Dr Samad said the Directorate had also paid the determined price of both proprieties to the DC Peshawar for further payment to the owners.

Dilip Kumar died this morning in the Mumbai hospital where he had been admitted for around one week. He was 98. "He passed away due to prolonged illness at 7.30 am," Dr Jalil Parkar, who had been treating Dilip Kumar, told news agency PTI. Dilip Kumar was buried with state honours at the Juhu Cemetery in Mumbai's Santacruz on Wednesday evening even as social media overflowed with tributes to the star of iconic films such as Mughal-e-Azam and Devdas.