"Watching This On Loop": Video Of Dog Bowing Down Before Ganesha Idol Melts Hearts Online 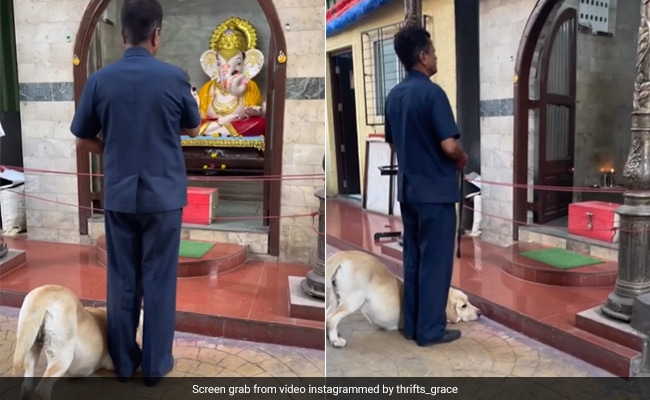 The video has accumulated more than 291,000 likes and over 1.8 million views.

Social media is full of videos that perfectly capture the cute antics of animals. This time a heartwarming video of a dog bowing down before a Ganesha idol outside a time is going viral on the internet.

The clip, shared on Instagram by a page named Pure Thrift, showed a dog bowing down outside the temple as a sign of respect. While the man accompanying the pooch was also seen paying his respects, the canine was seen lowering its head and touching the ground with the bottom of its face.

At the end of the video, as soon as the man finished his praying, the dog too was seen getting up and beginning to walk with him.

Notably, the video seemed to have been recorded by a passerby who noticed the duo. It was uploaded on Instagram a few days back, and since then it has accumulated more than 291,000 likes and over 1.8 million views. Internet users flooded the comment section with hearts and love-struck emojis.

While one user wrote, "This is so, so cute. Can't stop watching this video," another said, "Uff, it's too adorable". A third commented, "Watching this on loop. Dogs are gems." A fourth added, "Bappa bless this baby".

Meanwhile, speaking of adorable animal antics, a while back a video of a dog giving its owner a warm hug every time both of them leave the house had taken the internet by storm. The text in the video read, "My dog gives me a thank you hug every time we go out." the post garnered more than 17 million views and over 1.3 million likes.