In the viral video, the woman can be seen gently placing the ring on her golden retriever's nose and asking him to "stay". 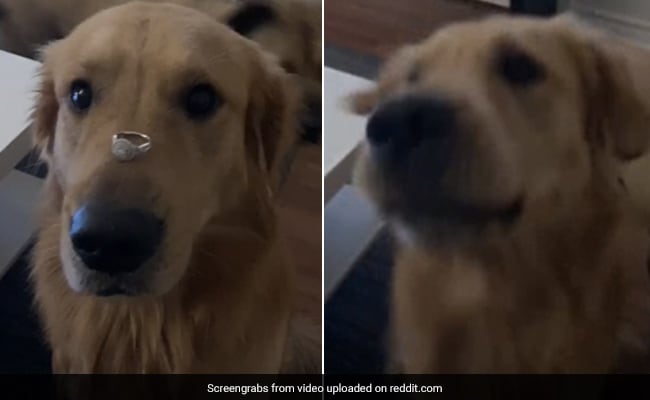 A diamond ring on a dog? Not a good idea.

A woman who got her dog to pose with her engagement ring ended up regretting it almost immediately. Footage that has gone viral on Reddit shows a woman putting a diamond ring on her dog's nose, thinking it would make for a cute engagement announcement. It would have too, but for a slight mishap - the dog gobbling up the ring.

In the viral video, the woman can be seen gently placing the ring on her golden retriever's nose and asking him to "stay". The dog obeys initially, sweetly looking up with the piece of jewellery balanced on his nose. Seconds later, the pooch flips his nose and crunches down on the expensive ring - prompting an exclamation of shock from the woman filming the video.

The unfortunate but funny video was shared on Reddit with the caption, "What could go wrong if I show off my new engagement ring?" The user who shared it said in the comments section that the video was sent to them by a friend.

WCGW if I try to show off my new engagement ring? from r/Whatcouldgowrong

The video has gone viral on Reddit, collecting nearly 32,000 'upvotes' in a day. While many were amused, others slammed the pet owner for being "irresponsible" and "stupid".

"Don't you train dogs to do that?" asked one Reddit user. "Place biscuit on nose...wait...wait, GO, dog eats biscuit."

"This lady deserved that. You don't put inedible objects on a dog's snout like it's a treat," said another.

"That really was a diamond in the rruuuuuuuuffff,"