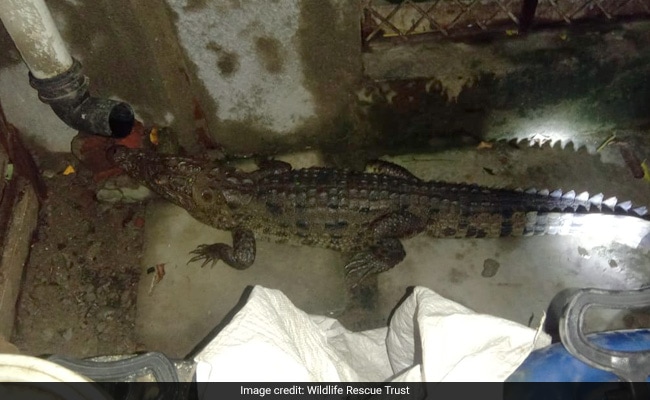 A man in Gujarat found a crocodile in his bathroom.

A Gujarat man received a huge shock last week on spotting a crocodile in his bathroom. On Tuesday night, Vadodara resident Mahendra Padhiyar woke up on hearing a noise. He went into his bathroom to check what it could be, thinking it was probably a cat. Instead, he received a shock on entering the bathroom and seeing a crocodile in one corner, staring back at him with its teeth bared.

Mr Padhiyar immediately called Wildlife Rescue Trust, a Vadodara-based animal welfare organisation, to capture the four-and-a-half-foot-long crocodile. Members of the organisation reached his house at around 2.45 am in the morning.

"It was a bit tough to rescue the reptile as it was dark," a member of Wildlife Rescue Trust told Times of India. "The crocodile was also aggressive."

The crocodile was finally captured by Manish Bist and Krishna Gayakwad of Wildlife Rescue Trust in an operation that lasted one hour. Watch a video of the rescue below:

According to Arvind Pawar of Wildlife Rescue Trust, the crocodile had probably strayed into the house from the nearby Vishwamitri River. He told NDTV that incidents of crocodiles entering residential neighbourhoods in the city are not uncommon, as the river is home to a number of the reptiles.

In August, a scary video of a crocodile almost attacking a dog on a water-logged street of Vadodara had also gone massively viral online.