Watch: US Cop Comes Across Car Made Entirely Of Snow

"Some people make snowmen. Not the people in the northwest corner of the panhandle - they make snow cars, snow Mustangs." 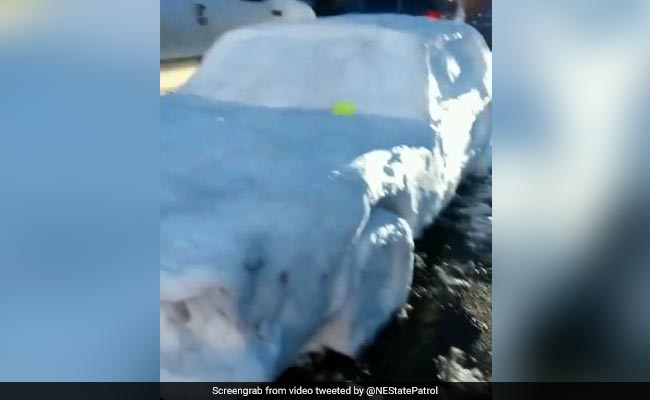 A Nebraska state trooper recently came across a car made of snow.

Forget snowmen and igloos, people are getting more and more creative with snow. A Nebraska state trooper was recently left surprised when he came across a car constructed entirely out of snow. A video posted on Twitter by Nebraska State Patrol shows the snow car, complete with a post-it note on the windshield to stand in for a parking ticket.

According to Nebraska State Patrol, the video was shot by Sergeant Mick Downing, who came across the unusual sight while driving in the city of Chadron.

"What in the heck?" he can be heard saying in the video. "Some people make snowmen. Not the people in the northwest corner of the panhandle - they make snow cars, snow Mustangs."

Sgt. Downing came across an awesome find yesterday in Chadron.

Now this is artwork! #SnowPonypic.twitter.com/KXtjBsmdj5

Since it was posted on Sunday, the video of the snow car has collected over 18,000 views and a ton of impressed comments. Many have praised the unidentified artist who crafted the car.

Now this takes talent....and it looks like it actually received a parking ticket. Bwahahaha https://t.co/o5snj0a5Tz

In November last year, another example of snow art was seen when a woman in Canada crafted a snow woman bride named Saddi Juliet.