Watch: This Plane Dropped Thousands Of Fish Into A Utah Lake. Here's Why 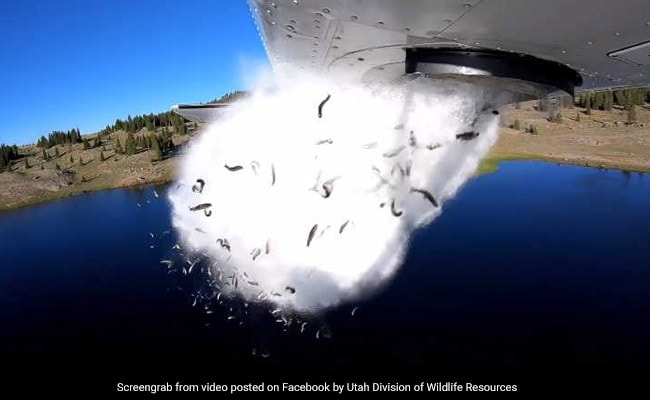 The video explains why the fish is dropped like this.

Who cares about snakes on a plane - this video of thousands of fish being dropped from a plane is far more interesting. A video shared by the Utah Division of Wildlife Resources on Facebook shows a plane dropping thousands of fish into a lake in Utah. In case you're wondering why, this is how wildlife officials "stock fish into high-mountain lakes".

"If you see flying fish at Utah's remote lakes, don't be alarmed!" says the caption posted along with the video on August 24. The video shows the fish being dropping from a hole in the bottom of the plane as it flies over the lake.

The video, complete with captions playing along with the footage, explains that since the fish are small, most of them aren't hurt in this process.

"The fish are tiny - anywhere from 1-3 inches long - which allows more than 95 percent of them to survive the fall," Utah Division of Wildlife Resources explained in a tweet.

According to LiveScience.com, this is how over 200 of Utah's remote mountain lakes are stocked each year since they are usually far from roads and may take longer to reach by land. If it wasn't for this method, many of Utah's lakes would be fishless.

The video has collected quite a few reactions on Facebook.

"I had no idea this is how they refill," says one Facebook user. "This is interesting," says another.

"Give us a heads up before transplanting any moose or antelope," jokes a commenter. "Can I get the scheduled drops. So I can be ready with a net. Probably the only way I might catch a fish," quips another.