Bhediya' is directed by Amar Kaushik. It is set to hit the theatres on November 25. 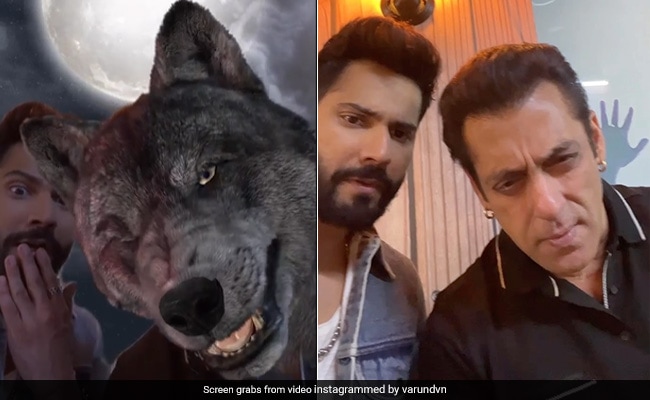 The video has garnered more than four million views and over 568,000 likes.

Varun Dhawan and Kriti Sanon have been promoting their upcoming film 'Bhediya' in full swing. In the movie, Varun will be seen playing the role of a werewolf and it has already created a buzz on social media.

Now, for their recent promotional outing, Varun and Kriti visited Salman Khan on the sets of the reality show Bigg Boss 16 and it looked like they had a blast. Taking to Instagram, Varun shared a video of a fun moment he shared with Salman. "Bhai bane BHEDIYA. Had to bite him. Had a great time on big boss with bhai @beingsalmankhan," Varun captioned the post.

In the clip, Varun Dhawan and Salman Khan can be seen sitting together with a camera placed in front of them. Seconds later, the 'Tiger 3' actor was seen using the 'Bhediya' filter and transforming into a ferocious werewolf. The audio in the background revealed a howling sound as well, while Varun was seen giving a priceless reaction.

Shared just a few hours ago, the video has already taken the internet by storm. It has garnered more than four million views and over 568,000 likes. Internet users flooded the comment section with laughing and fire emojis.

While one user jokingly wrote, "Varun Dhawan acting typical Indian who has no idea ki pic le ya video". Another said that Salman isn't a wolf but a Tiger, referring to his 'Tiger Zinda Hai' franchise. "Salman bhai sher hai bhediya nahi."

A third commented, "Bro you just created a meme material, Memers gonna love it !" A fourth added, "Tiger bana bhediya too much fun".

Meanwhile, coming back to the movie, 'Bhediya' is directed by Amar Kaushik. It is set to hit the theatres on November 25. The movie, which has been shot in Arunachal Pradesh, has its roots in popular folklore. The makers of the film have released two songs - Thumkeshwari and Apna Bana Le - so far.