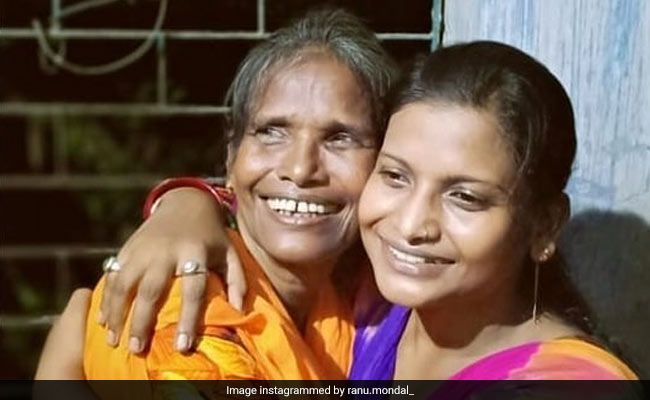 Ranu Mondal became an Internet sensation almost overnight after a video of her singing at the Ranaghat railway station went viral. She was widely praised for her melodious voice, which many compared to Lata Mangeshkar's. After the video went viral, reports began to emerge that Ranu had been abandoned by her daughter Elizabeth Sathi Roy - something that Elizabeth denied. Talking to news agency IANS, Elizabeth said that she took care of her mother as much as possible and though she did not visit her often, she was in touch with her.

Now, a video of Ranu Mondal, 59, singing with her daughter has emerged online. In the video, the two are seen singing Aaj Kal Tere Mere Pyaar Ke Charche - a Mohammed Rafi song from the 1968 movie 'Brahmachari'.

The video was shared on an Instagram page dedicated to Ranu Mondal, where it has been viewed over 10,000 times. Watch it below:

The video has collected a ton of appreciative comments from people praising both Ranu and her daughter.

Elizabeth Sathi Roy was criticised on social media for 'abandoning' her mother. "I didn't know that ma used to sing at the railway station because I could not visit ma regularly," she told news agency IANS after the reports emerged. "I am a single mother looking after my younger son. So, I have my own struggles. Still, I try to look after ma as much as I can. I tried to get her to stay with us several times, but my mother does not want to stay with us. Despite this, people are blaming me."

Ranu Mondal shot to viral fame after she was filmed singing Ek Pyaar Ka Nagma Hai. After that, she was invited by singer composer Himesh Reshammiya to reality show Superstar Singer. She also recorded Aadat and Teri Meri Kahaani for Himesh's film 'Happy Hardy And Heer'.