A video has appeared on social media that shows a peacock's maginificent dance, as it slowly opens its feathers. 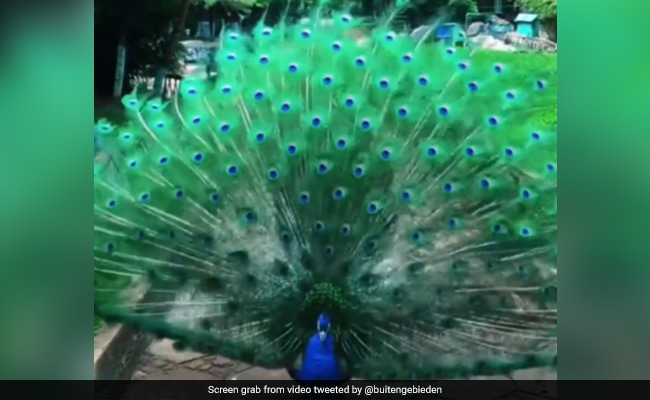 Peacocks are among the most exquisite birds on the planet, and for good reason. With their iridescent feathers, fan-shaped tail, and magnificent display of feathers on each wing make them stand out.

A video has appeared on social media that shows a peacock's maginificent dance, as it slowly opens its feathers.

The mesmerising video of the dance has been shared by Buitengebieden on Twitter on Wednesday with just one-word caption: "Peacock..."

In the seven-second clip, the peacock is seen spreading its beautiful feathers and it is a sight to behold.

Since being shared, it has accumulated around 13.7 million views and over five lakh likes. More than 62,000 users have re-tweeted the post.

"I cannot stop watching this," wrote a user, while another said, "Me waking from sleep shaking my hair."

"At Scone Castle in Scotland there is a white peacock. That was an amazing display of tail feathers," wrote a third one.

Months ago, a video went viral where a rare white peacock was seen flying down to the grass from a statue on top. The video was shared by Yoda4ever on Twitter.

This video was shot in the beautiful gardens of Isola Bella, one of the Borromean islands in Maggiore Lake near Stresa, Italy. The gardens are home to both white and coloured peacocks. The Borromeo's Islands are a little paradise in the centre of the lake.