Meng Lan the panda has a history of naughty behaviour, according to Beijing Zoo 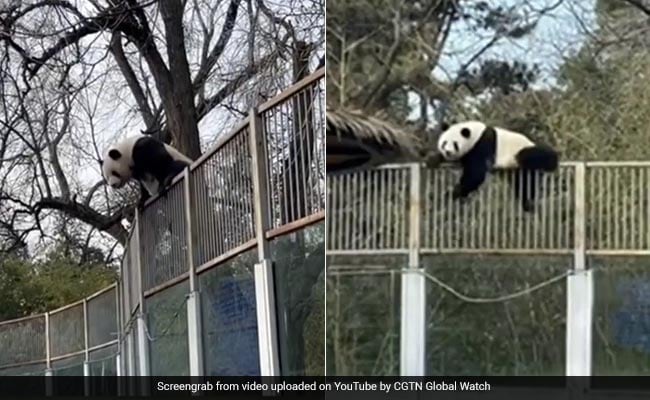 A panda escaped its enclosure at the Beijing Zoo on Wednesday.

Hilarious footage that has gone viral online shows the moment a giant panda escaped from its enclosure at China's Beijing Zoo. According to Metro News, visitors at the zoo watched in amazement as six-year-old Meng Lan scaled the wall of his enclosure on Wednesday. Staff members reportedly told the curious crowds to keep their distance from the panda as he climbed the six-foot-tall metal fence surrounding his enclosure.

The "naughty" panda made it to a buffer zone that separates his enclosure from the area of the zoo that is open to public, before being lured back with the promise of lunch. Footage of the panda's prison break was captured by a visitor to the zoo and has gone viral on social media. Watch the video below:

The Beijing Zoo said in a post on Chinese microblogging site Weibo that Meng Lan never came in contact with the public and was never in an area of the zoo that visitors have access to. He was lured back to his enclosure by a zookeeper who offered him food, and was later observed playing happily inside. The zoo said that the panda reconsidered its zoo break after smelling the food on offer.

The zoo added that Meng Lan has a history of naughty behaviour and that his enclosure would be modified to prevent any more escape attempts.

Meng Lan was born at the Chengdu Research Base of Giant Panda Breeding in 2015 and moved to the Beijing Zoo two years later.