Watch: Mother Makes An Innovative Backseat For Her Child On Bicycle, Internet Finds It Impressive

Along with the video, Mr Goenka wrote, "What a mother wont do for her child." 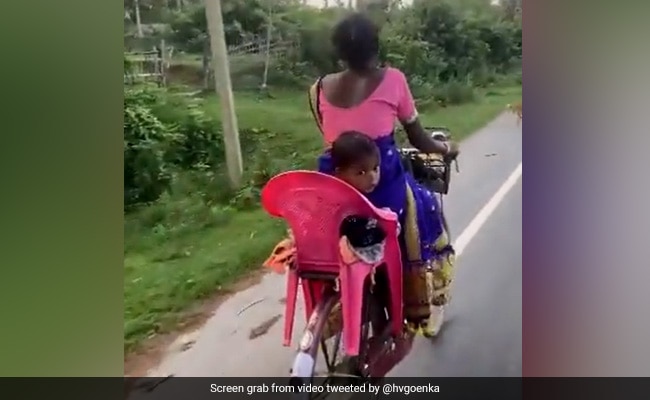 The video has garnered 1.4 million views

It's said necessity is the mother of all inventions. But, when it's a mother inventing for her child's comfort, the creation is all the more beautiful. One example of this was recently seen in a video posted by industrialist Harsh Goenka. Innovation is a hallmark of excellence and this mother certainly excels in this field. A mother made a makeshift special seat for her child.

The video shows a mother cycling on the road, but what caught everyone's attention was the special child seat for her child. The mother made a backseat with a small child-size plastic chair that was tied to the cycle. The video shows both the child and mother comfortably sitting and enjoying the ride.

Along with the video, Mr Goenka wrote, "What a mother won't do for her child." The 9-second clip shows that all you need is a creative streak to deal with anything in life.

What a mother won't do for her child 🥰🥰🥰 @ankidurgpic.twitter.com/TZWjHWAguS

So far, the video has garnered 1.4 million views, 5,636 likes and several comments. Internet was highly impressed with the woman's creativity. A user wrote, "Mother of all innovations begin with a mother and her innovative efforts to keep a child happy." Another user wrote, "Great innovation, such a comfortable back seat. Why can't we have it on the cycle."Necessity is the mother of invention," the third commented.

Recently, Mr Goenka posted an old video revealing "what really excites" Ratan Tata, the Chairman Emeritus of Tata Group of Industries who is well-known for his philanthropy. In the clip, the 84-year-old business tycoon talked about the "greatest pleasures" of his life. "The greatest pleasure I've had is trying to do something, everybody says 'could not be done,'" Ratan Tata revealed in the clip.