In two separate videos, schoolgirls dressed up as astronauts to walk on pothole-ridden roads 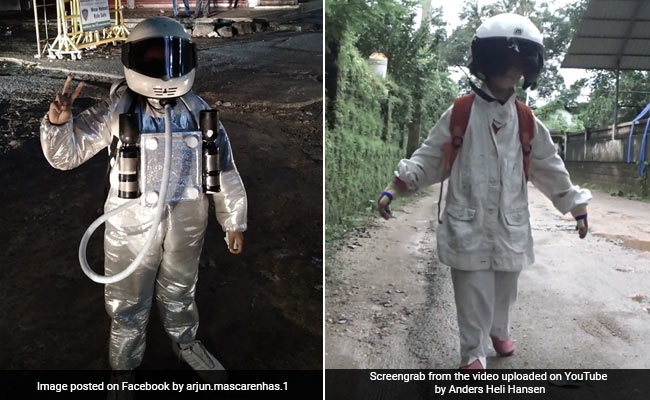 Adlin D'Silva and Nia Govind dressed up as astronauts to draw attention to the problem of potholes.

Two schoolgirls in Mangaluru, Karnataka, turned astronauts to walk on the city's pothole-ridden roads. Inspired by Bengaluru artist Baadal Nanjundaswamy, who dressed up like an astronaut to 'moonwalk' on the city's roads and highlight its crater-sized potholes, the two schoolgirls, in separate incidents, recreated the viral video.

According to the Mangalorean, Adlin D'Silva, a class VI student at St Agnes School, Bendore-Mangaluru, dressed up in an astronaut costume to walk on potholes near Central Vegetable Market. A video of her moonwalk was shared to the Facebook page 'MCC Civic Group' on Saturday.

"Through this video, we hope to draw the attention of the city corporation. It has stopped raining, but the corporation has not yet commenced road repair," Arjun Mascarenhas, co-founder of the civic group, said to Times Of India.

Adlin D'Silva wasn't the only one to recreate the viral video. Lower kindergarten student Nia C Govind also walked on Mangaluru's potholed Basavanagudi Road while dressed as an astronaut. Her video, titled 'Mangalore Roadnaut', was shared on YouTube on September 3, and shows her walking on a damaged road in an astronaut suit.

Watch her video below:

"The video titled 'Mangalore Roadnaut' had gone viral on YouTube. Following the video, Mangaluru City Corporation repaired the road immediately. The road was in pathetic condition for almost a year," Nia's mother, Deepa Sithesh, said to the Deccan Herald.

Baadal Nanjundaswamy's viral video inspired artists in Mexico too, where it was recreated just a few days ago. He has received many requests to recreate it in other countries as well.