Ethan Studenic hid the ring in a case made out of two seashells. 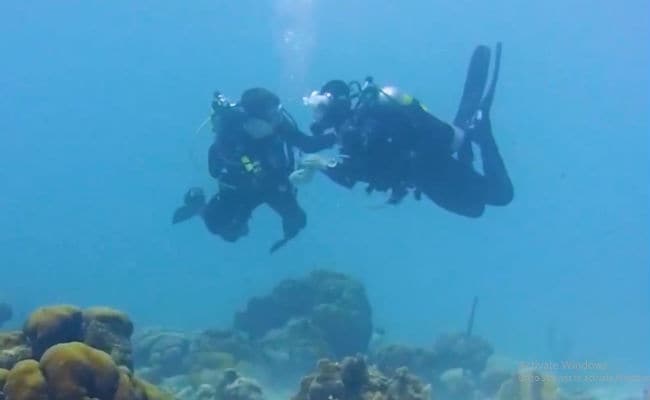 Ethan Studenic popped the question to Morgan Whittaker underwater in the Caribbean Sea.

The touching moment a man surprised his girlfriend with a proposal 30-feet under the sea was captured on camera by their friends. Virginia resident Ethan Studenic popped the question to Morgan Whittaker underwater in the Caribbean Sea. The 30-year-old planned the proposal for five years before finally concealing the ring in a shell to propose underwater last summer during a scuba diving excursion.

According to Metro News, Ethan pretended to pick something up from the ocean floor before revealing the ring and asking his girlfriend of 10 years to marry him. He had the ring hidden in a case made out of two seashells.

Morgan Whittaker, 28, nodded yes and the couple hugged before going up to the surface together.

The couple was scuba diving off the Caribbean island of Bonaire with four friends. All the friends carried cameras and swam away before Ethan popped the question to capture the moment.

"Five years ago, I had the idea of an underwater proposal. I thought it would be cool, really unique and interesting," Ethan said, according to Fox News. "I decided to propose on the first reef we dove together."

"I thought if I could go back to Bonaire, I could recapture that magic of our first vacation away together."

For the extraordinary proposal, Ethan even had sea glass from their first trip to Bonaire crushed and embedded in the ring.

Ethan and Morgan, who met in 2008, are now planning to have a wedding in April.