Watch: Man Accidentally Falls Out Of Convertible BMW As Friend Tries To Show Off At Drivers' Meet

The hilarious incident took place at the 'Ultimate BMW Car Meet' on Sunday held at the British Motor Museum in Warwick, UK. 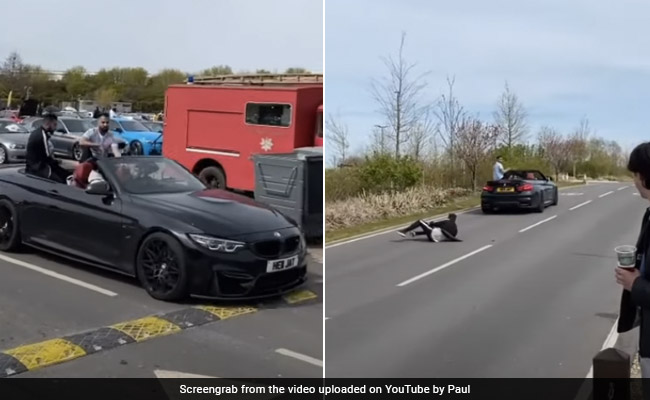 The incident took place at the Ultimate BMW Car Meet on Sunday.

In an embarrassing yet hilarious moment, a man fell out of a BMW convertible as his friends tried to make a stylish exit from a car enthusiasts' meet-up. According to the video of the moment, now going viral, the passenger is seen sitting on the back of the drop-top BMW and slid off as his friend roared the engine. According to NationalMail, the incident took place at the "Ultimate BMW Car Meet" on Sunday held at the British Motor Museum in Warwick, UK.

In the clip, one can see a group of four friends leaving the venue in the stylish BMW M4. The driver of the black convertible approached the speed bump very slowly. However, after smoothly driving over it, he drastically revved his engine and amped up his speed, sending the unprepared passenger flying off the back.

Take a look at the clip:

Despite trying to cling on, the man was left sprawled across the road, while the bystanders watched on. After hurtling to the ground, the tracksuit wearing man is then seen dusting himself off before walking back towards the BMW.

The clip has left internet users in stitches. The video has been viewed over 3,800 times since being posted on YouTube. It has been shared on other social media platforms as well, where a user jokingly says, “Love it when showing off turns out like that.” Another user wrote, “Play it cool…I'm sure nobody saw!” Another user said, “Saw that coming from a mile away.” “There's the lessons for the kids on wearing seat belts. You might look cool until you fall out!” added third.