Sonoran Mountain Kingsnakes are medium-sized snakes with red, black, and white crossbands on its body. 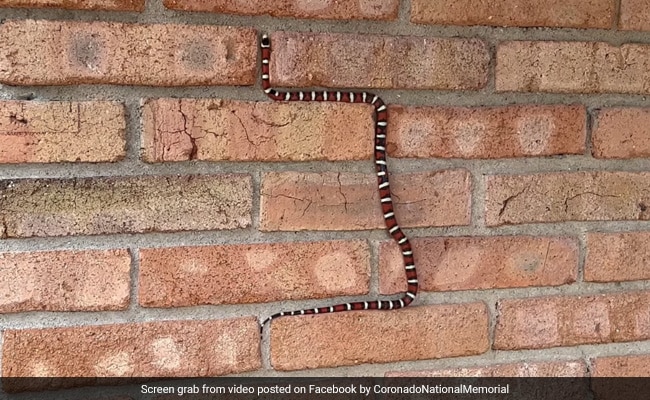 The clip shows the snake climbing up the brick wall

A Sonoran Mountain Kingsnake showed off its mesmerising wall climbing skills at Coronado National Memorial in Arizona. The video posted on Facebook was shared by National Park Service staff. The clip shows the snake climbing up the brick wall. It perfectly guides its colourful body to fit through spaces between the bricks.

"You never know who might stop by the visitor center. Yesterday this Sonoran mountain kingsnake (Lampropeltis pyromelana) showed off its climbing skills on our adobe walls," read the park's Facebook post.

Sonoran Mountain Kingsnakes are medium-sized snakes with red, black, and white crossbands on its body. Internet is mighty impressed with its climbing skills and few also commented that it reminded them of a Snake game on "Nokia."

A user commented, "I feel like this needs the Tetris theme music." Another user wrote, "I used to play this game on my Nokia. Graphics weren't as good though.", “Adorable! Pretty snake and interesting climb. It's a King snake,” the third wrote.

Sonoran Mountain Kingsnakes are found in central and southeastern mountain regions of Arizona, according to the King Snake website. The King snake is a small, slender species, reaching an adult size of 42 inches (105 cm). The snake is clad in over 41 rings of white or yellow-white bordered by thin black and wide red sections.

Sonoran mountain kingsnakes spend the majority of their time hidden under rocks or in rock fissures. It requires a hibernation period of four to five months at 45-55 degrees F.

Viral: Video Of Rabbit Playing With Bedsheet, Internet Is All Hearts