The testing of the engine that will take the first woman to the Moon is in full swing and Jeff Bezos shared a stunning video from one of the tests this week. 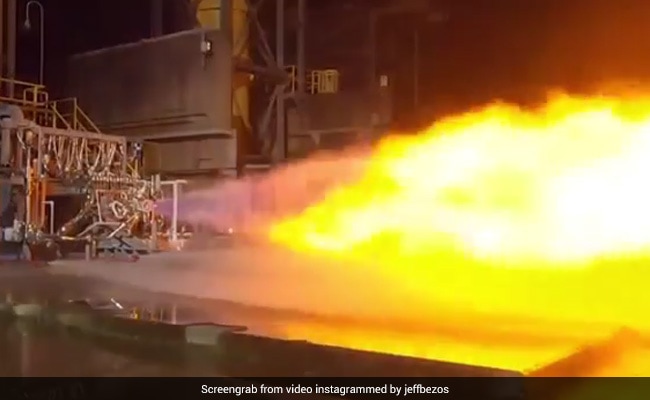 Blue Origin-Artemis: The clip shows blinding flames out of the engine during the test

Amazon founder Jeff Bezos's aerospace company Blue Origin has its eyes set to put the first woman on the moon.

The testing of the rocket engine that will take the first woman astronaut to the moon is in full swing and Mr Bezos has shared a stunning video from one of the tests this week.

The short clip shows blinding and colourful flames out of the engine during the test.

Describing the BE-7 engine as "high-performance", Mr Bezos said the lunar landing engine was a "liquid hydrogen/liquid oxygen" built with a 10,000-pound force thrust.

The engine can deep throttle down to 2,000 pound-force for a "precise landing" on the moon, Mr Bezos's caption read. A pound of thrust is how much thrust it would take to keep a one-pound object unmoving against gravitational force.

The engine will power the Human Landing System (HLS) lander that Blue Origin has been working with NASA's Artemis programme to put humans on the lunar surface by 2024.

The video, shared by Mr Bezos on Instagram, was from a test at NASA's Space Flight Center at Hunstville, Alabama.

The programme has been tested for a cumulative 1,245 seconds, Mr Bezos added in his post.

Blue Origin, run by Mr Bezos for over two decades teamed up with aerospace giants last year for building a lunar landing system, an ambitious goal of Washington DC to put humans back on the moon by 2024.