The video, which was shared by the child's father, has gone viral on social media. 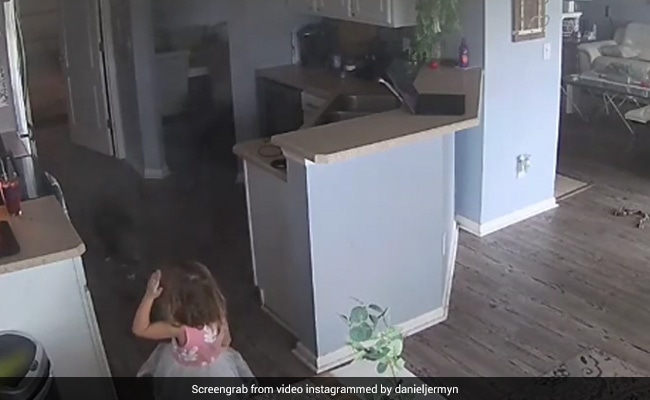 Amelia Jermyn, 4, noticed a kitchen fire and ran to alert her father.

A four-year-old from Florida prevented a potentially-massive house fire by thinking on her feet and alerting her father. Amelia Jermyn was playing in the kitchen and the adjacent living room when she noticed a fire in the kitchen, reports ABC News. The incident was caught on camera and shared online by Amelia's father, Daniel Jermyn. The video shows little Amelia playing and dancing in a tutu to the songs from the animated film Frozen when the mishap occurs.

Once she notices the fire, she is seen approaching the area to take a look and can be heard mumbling the words, "That's a fire. Oh no, my dad is gonna kill me," while maintaining a safe distance. After a few decisive seconds, where she can be heard saying "think, think", she sprints towards her father who is in another room. Her father then rushes into the kitchen, as the dogs of the house run around confused, and is initially shocked by the fire. He, however, immediately moves the errant air fryer that started the fire into the swimming pool and douses the rest of the flames with water from a cup.

Sharing the video, Mr Jermyn wrote, " So my daughter saved my home tonight. The air fryer short circuit and caught on fire. Now, that it's all said and done you can hear Amelia say "oh no, my dad is gonna kill me" followed by "think think" She is a real hero today all while Frozen was playing in the background. I think Idina Menzel would be proud," and tagged the singer who voiced the lead character Elsa in Frozen.

Take a look at the video here.

Mr Jermyn was brushing his teeth when the incident occurred. Speaking to News4JAX, he said, "She was like ‘Dad, you have to see this' and I don't know why, so I was, like, ‘Ok, fine.' So I am brushing my teeth and walking out of the room."

He added, “And, I couldn't comprehend it. You know what I mean? As soon as you see it, there's no way this is going on right now, and I look and the air fryer is on fire.”

He added that the air fryer was used to cook chicken nuggets and french fries 30 minutes before the incident. The food had been consumed and the appliance was simply "sitting on the stove" when it caught fire. Except for Mr Daniel suffering a few burns on the leg, none of the other family members, including the dogs, sustained any injuries.

Responding to the post, one user said, "Get yourself a lunch fire extinguisher from Home Depot today. Thank goodness everyone is (fine) and you didn't burn your hand."

Another comment read, "Glad everyone's ok!!! She really is the best," while another user said, "Your daughter is a hero!"

Tell us what you think of this little hero and her smart thinking.