The clip, uploaded by industrialist HarshGoenkaon Twitter, has captured Mount Everest in all its glory. 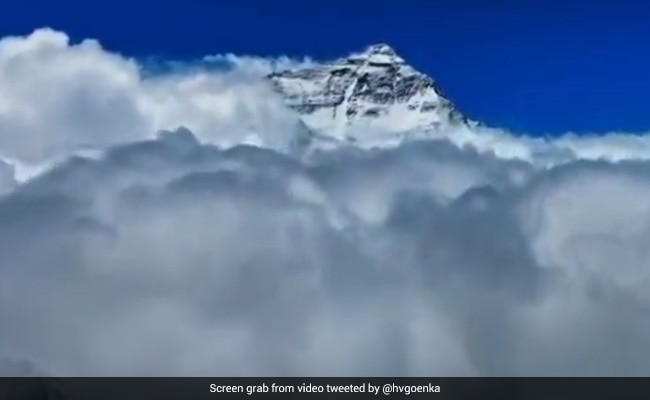 The video has amassed nearly 63k views on Twitter.

Being the highest peak in the world, Mount Everest offers views like no other place on Earth. As it may not be possible for everyone to witness the mountain in person, industrialist Harsh Goenka has treated us to some breathtaking drone footage of Mount Everest.

The clip, uploaded by Mr Goenka on Twitter, has captured Mount Everest in all its glory.

The footage also gives a glimpse of some mountaineers who set out to conquer the peak and dare to brave the extreme conditions of the region. At one point in the clip, we see one mountaineer launching a drone that has recorded the breathtaking sight.

“Some magnificent visuals of Mount Everest captured by a drone!” the caption read.

Some magnificent visuals of Mount Everest captured by a drone! pic.twitter.com/7tsIVMzyBc

The video has amassed nearly 63,000 views on Twitter, leaving many captivated.

“What spectacular visuals. How the new age technology helps in exploring wonders from nature..” wrote a user.

What a spectacular visuals..How the new age technology helps in exploring wonders from nature..

Some highlighted the capability of a drone to capture such footage.

Drone visuals are like the dawn of heavenly vision

“I wanted to see heaven. I went to the Himalayas & knew how heaven would be like,” another person wrote.

I wanted to see heaven . I went to the Himalayas & knew how heaven would be like !

For this user too, the mountain is no less than heaven.

“Wow behold the celestial divine beauty,” read one of the comments

One quipped, “So the drone can now say “I climbed Mount Everest.”

So the drone can now say “I climbed Mount Everest.”

Another seemed curious about how the drone could fly above the peak, given the extreme height and thin air.

Just curious, given that air is so thin at such heights, wouldnt a very powerful drone be required to reach that height?

So what do you have to say about this video?