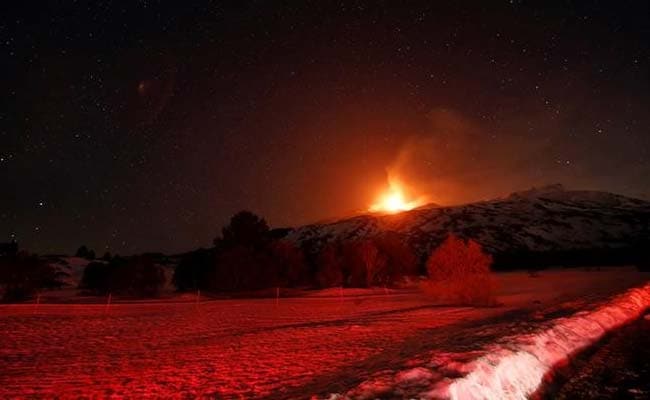 Sicily, Italy: Tourists, journalists and scientists hoping for a better look at Europe's most-active volcano were in for a shock as it suddenly erupted on Thursday. Molten rocks and steam injured and burned at least 10 people following an explosion on Mount Etna. A BBC news crew, there to do a story on volcano monitoring, captured the dramatic moment of the eruption and its immediate aftermath. A BBC journalist took to Twitter to describe what she called her "very lucky escape."

First, take a look at this video posted on Instagram just minutes before the eruption:

Tourists had been drawn to Mount Etna, on the Italian island of Sicily, to observe the spectacle of the active volcano erupting, only to be caught by surprise when spewing magma hit snow, creating pockets of steam and causing an explosion.

Among those present on the mountain at the time of the midday explosion was the BBC's global science reporter, Rebecca Morelle, who described the experience in a series of tweets.

Caught up in incident at Mount Etna - bbc crew & tourists caught up in huge explosion - caused injuries and evacuation from scene. (1)

Many injured - some head injuries, burns, cuts and bruises. Volcanologist said most dangerous incident experience in his 30 year career (3)

Incident could have been worse - explosions like this have killed - but seems minor injuries for now. (4)

Bbc team all ok - some cuts/ bruises and burns. Very shaken though - it was extremely scary. (5)

Reminder of how dangerous & unpredictable volcanoes can be - everyone had a very lucky escape. (7)

Running down a mountain pelted by rocks, dodging burning boulders and boiling steam - not an experience I ever ever want to repeat (8)

The BBC reporter said a volcanologist there told her it was the most dangerous incident he had experienced in his 30-year-career studying Mount Etna.

Promoted
Listen to the latest songs, only on JioSaavn.com
Watch the dramatic video of the moment the TV crew was pelted with boiling rocks as Mount Etna erupted in front of them:

"Very relieved to be safe" - the terrifying moment @BBCMorelle and crew were caught up in Mount Etna eruption https://t.co/11inHwxYPOpic.twitter.com/Zz0JKmWU1v

Ms Morelle later posted a photo on Twitter of her cameraperson Rachel Price holding up a thick winter jacket with a hole burnt through it by a "lump of rock."

Back at hotel now after Etna explosion. Here's @NewsCamerawoman with the massive hole a lump of rock burnt through her coat. pic.twitter.com/GVSyj3Sa9A

Mount Etna has been active for the past two days, creating a visual spectacle as it spews lava and ash into the air. A new lava flow started from the southeastern crater on Wednesday. So far it has not disrupted traffic at the nearby Catania airport or created inconvenience for residents in the area.