A video is gaining traction on social media that shows a cobbler feeding birds outside his makeshift shop. 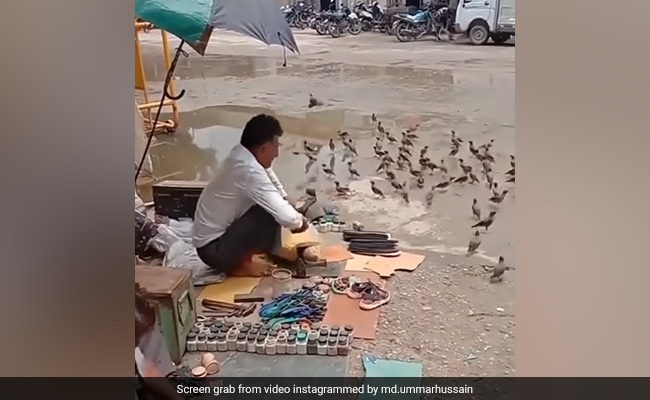 Picture shows the cobbler sitting at his shop with a bag full of grains in his hand.

There are several forms of kindness. In summer, many people leave water outside their homes or on rooftops so that the birds can survive in the heat. A video is gaining traction on social media that shows a cobbler feeding birds outside his makeshift shop.

Shared by a user named Md Ummar Hussain on Instagram last month, the video is gaining traction now. In the video, a cobbler is seen taking a bag of grains from his shop and placing it next to the birds.

All the birds slowly move towards the shop and begin to eat the grains being offered. Even before the man starts feeding them, the birds are seen gathered near his shop.

Since being shared, the video has amassed over 2.3 million views and more than 1.4 lakh likes. Users have left heartwarming remarks in the comment section of the post praising the man.

"How can someone be so rich," wrote a user.

Another said, "Best moment of the humanity."

"He is really richest man from heart," commented a third user.

On social media, a number of videos that highlight the generosity of different people are frequently shared.

Recently, a video went viral that showed a railways personnel saving a woman's life who was trying to cross train tracks. The video of the incident, captured on CCTV installed at the station, was posted on Twitter by several users.