The chef seems extremely disappointed and reacts to the woman making the dish by saying, "You need to go see a doctor," as the video progresses. 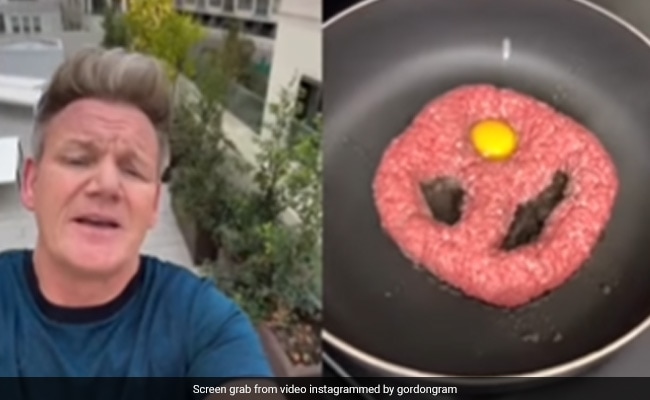 British Chef Gordon Ramsay often posts videos of his reactions to dishes made by TikTok users. Some of his reactions are extremely funny to watch on YouTube. Mr Ramsay has brought his signature talent, yelling critiques at chefs, to social media - and it's pretty epic.

One such video of the chef reacting to a dish made with eggs, chips and cream has gone viral on the internet. The video was posted by Mr Ramsay on his official Instagram account and has amassed reactions from many internet users. The clip has been split into two screens- the chef is seen reviewing the dish from the left side of the screen while the video of the dish is on the right side. The chef seems surprised and even asks "What are you doing?" in the video. He seems baffled by the ingredients the woman in the video is using in the dish. As soon as she puts cream on the Lays chips present in the pan, Mr Ramsay says, "What the hell, you have lost the plot."

The chef seems extremely disappointed and reacts to the woman making the dish by saying, "You need to go see a doctor," as the video progresses.

The video was shared 19 hours ago and has five million views and two lakh likes. He captioned the video, "Hey @mrnigelng I'm definitely going to need some help with this one."

"I've never understood this obsession with using potato chips for mashed potatoes. If you don't want to make mashed potatoes from scratch they sell instant in the supermarket just at water," added another internet user.

"Who comes up with these ideas? That lady needs to stay away from a Kitchen," said a person.

"And that's how to make a disaster in 10mnts.. thanks for watching," commented another user.

"never in my life did i think i'd hear gordon ramsey go "haiyaaaa!" added another person.