Watch: Car Engulfed In Flames As Driver Races Back To Fire Truck

"Very quickly it became a great cloud of smoke, and then suddenly flames appeared about a foot from my right shoulder." 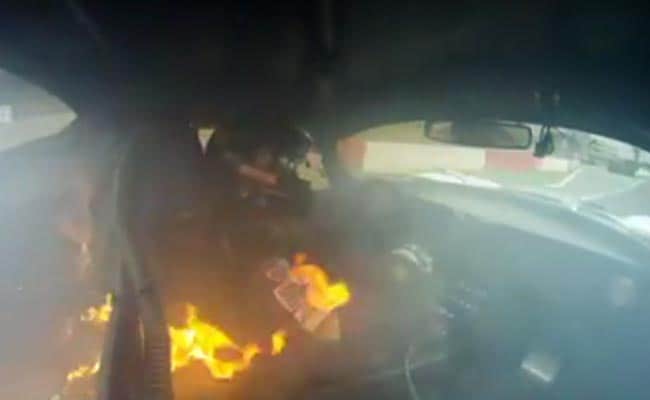 Calum Lockie raced back to fire trucks after his car caught fire.

Dramatic footage has revealed the moment racing driver Calum Lockie realised his car was on fire while competing in an event at the Donnington Park circuit in Leicestershire, UK. The footage shows Mr Lockie guiding his Shelby Cobra to safety by driving to pit lane fire marshals. According to Daily Mail, the incident occurred when Calum Lockie, 51, was co-driving with Julian Thomas on June 8.

Footage from the incident shows Mr Lockie behind the wheel as smoke billows out from behind him.

According to Mirror, Mr Lockie told Press Association: "Because of the speed reduction behind the safety car, the air flow was much reduced.

Describing the scene, he added: "Very quickly it became a great cloud of smoke, and then suddenly flames appeared about a foot from my right shoulder, and I thought 'ah'.

"It was a choice of pulling over at a marshals post or making it back to the pits. The marshals do a great job, but the resources at their posts are limited.

"So, if it's a persistent fire in a difficult to access place, they're at risk. Parking on grass in that situation is another interesting one, potentially.

So he made the decision to drive as fast as he could to the pit lane, where the circuit's fire truck was situated, even as flames engulfed his car and started to appear out of the engine bay behind the driver.

Fortunately, fire marshals were able to put out the fire and save the car. Mr Lockie himself managed to escape without any injuries and continued racing.