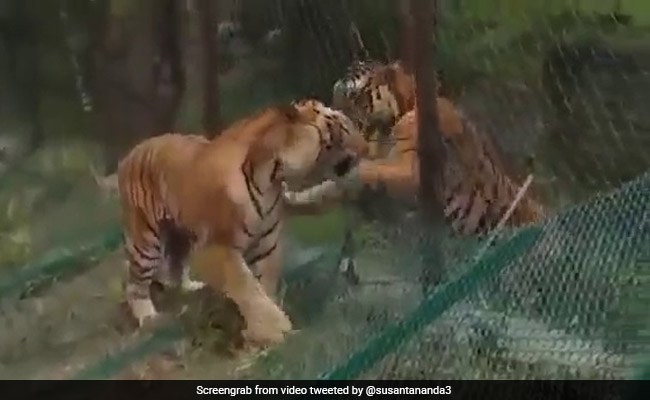 The fight between a wild tiger and a safari tiger was caught on camera in Karnataka. The video, which was shared on social media last year by the Karnataka Forest Department, has captured the Internet's attention again after resurfacing on Twitter. It was posted on the microblogging platform this morning by Indian Forest Service officer Susanta Nanda, who commented on the strength of the fence separating the two tigers.

According to the Karnataka Forest Department, the brawl between the big cats - one wild and the other a safari tiger - took place at Bannerghatta Biological Park. The park is a biological reserve which is part of the Bannerghatta National Park and home to a number of Bengal tigers.

In the video, the two tigers were filmed growling and jumping, trying to attack each other through the fence separating them.

"If the human relationship in this world were as strong as this fence," wrote Mr Nanda while sharing the short clip. "Wild tiger fights with a safari tiger at Bannerghatta, Karnataka," he added. In the comments section, he explained that the wild tiger was actually a "wanderer from neighbouring Cauvery sanctuary."

If the human relationship in this world were as strong as this fence????
Wild tiger fights with a safari tiger at Bannerghatta, Karnataka. pic.twitter.com/gT5tCOX4Yk

Since being posted on the microblogging platform, the video has collected nearly 5,000 views and a number of amazed comments.

The most common reason for fights between tigers is territorial, with male tigers clashing to defend their territory. Tiger fights also occur for mating rights with a female.

This is not the first time that a clash between two big cats has gone viral on social media. Recently, IFS officer Sudha Ramen also shared a video of a fierce fight between two male tigers.

Man Proposes To Girlfriend With Hundreds Of Candles, Burns Down Their Home