Virender Sehwag's Hilarious Video Will Remind You Of Your School Days

"Who all remembered themselves looking at his harkat?" Virender Sehwag asked his followers while sharing the video. 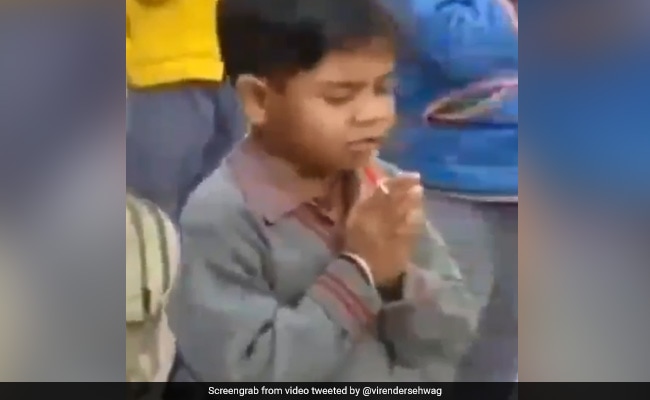 A screenshot from a video shared by Virender Sehwag.

A hilarious video shared by former cricketer Virender Sehwag is sure to cure your mid-week blues and take you right back to your childhood. This morning, the 41-year-old took to Twitter to share the video, which shows one hungry schoolboy sneakily eating a snack during a school assembly.

The video shows students, dressed in grey uniforms, praying with their hands folded and eyes closed during a school assembly. The camera focuses on one student with a lollipop hidden between his hands. The child manages to sneak in a few licks of the lollipop while enthusiastically singing the morning prayer, leaving Twitter users in splits.

"Is bachhe ka alag hi Jalwa hai! (This kid has swag)" wrote Sehwag while sharing the video. "Who all remembered themselves looking at his harkat?" he asked his 20 million Twitter followers.

Is bachhe ka alag hi Jalwa hai ! Who all remembered themselves looking at his harkat ? pic.twitter.com/e0Cmwkf5nG

The video collected over 10,000 views within 15 minutes of being posted. It has also garnered over 2,000 'likes' and a ton of amused comments. Some praised the schoolkid's multitasking abilities,  while others thanked Sehwag for sharing the video and taking them back to their childhood.

Virender Sehwag is known for his witty social media posts. Last year, it was his caption in a picture with his wife, Aarti Sehwag, that had his followers in stitches.