"A tiger's place is in wilderness not as pet in Dubai or anywhere else," an Instagram user said 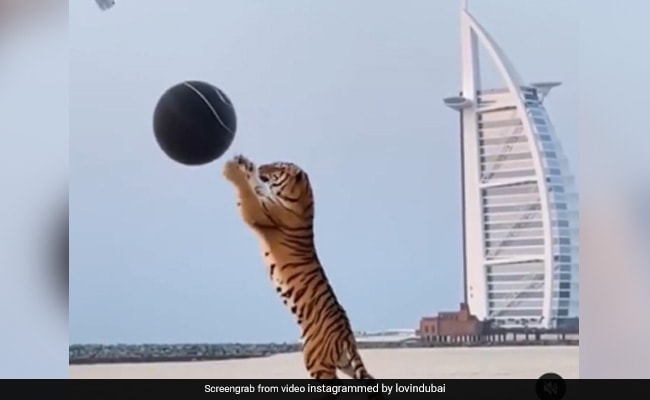 A tiger was used in a gender reveal party in Dubai.

In the day and age of extravagant (but often ill-judged) gender reveal parties, one couple in Dubai is facing flak for a stunt that has enraged animal lovers and wildlife activists. Footage that has gone viral online shows that the would-be parents used a real, live tiger to reveal the gender of their unborn baby. In the footage, the tiger appears to be on a beach next to the Burj Al Arab hotel in Dubai. Roaming freely without a chain or a leash, it approaches a bunch of balloons floating above the sand and raises itself up on its hind legs to pop one of them.

Pink powder bursts out of the balloon, signifying that the baby would be a girl.

According to local reports, the video was first shared online two days ago by Carlotta Cavallari, who added a disclaimer at the bottom. "Tiger was not harmed and plastic was disposed of. Relax everyone," she wrote.

The video went viral after it was shared by the 'Lovin Dubai' Instagram page. Watch it below:

Since being posted two days ago, the video has been viewed more than 3 lakh times and collected over 1,000 comments - many of them from people criticising the stunt.

"Absolutely disgusted. These majestic creatures are not on this planet for you to exploit for your own superficial pleasure!" one Instagram user wrote.

"A tiger's place is in wilderness not as pet in Dubai or anywhere else," another said.

"This isn't something to be proud of. These animals are not pets," a person pointed out, while several others branded the video "ridiculous".

Gender reveal parties are not new - they were popularised in the late 2000s and have since gained a reputation for becoming increasingly over the top. Last year, UAE-based Syrian influencers Anas and Asala Marwah hosted a gender reveal party at the world's tallest building, the Burj Khalifa, in an event that had gone massively viral online.