Viral Video: This Popcorn Salad Is Getting Roasted On Twitter 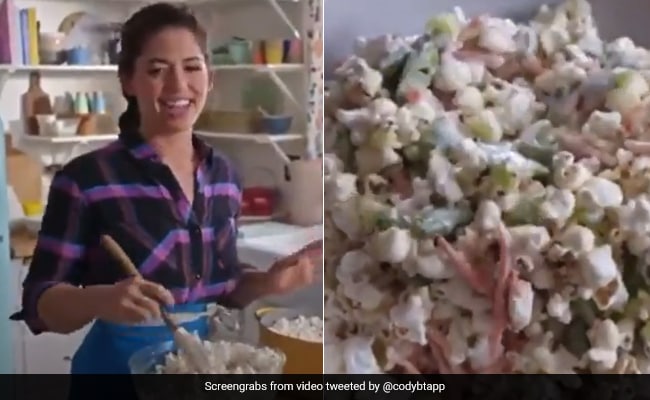 This popcorn salad recipe is getting roasted on Twitter.

Twitter has been savage in its takedown of a salad that some on the microblogging platform described as "a recipe from hell" and others branded a "crime against humanity". The reason for their outrage is the fact that the salad in question is made out of popcorn. Crunchy popcorn that is first dumped in a salad dressing made of mayonnaise and sour cream. Sounds unusual? Twitter thought so.

Food Network's Molly Yeh shared the recipe for "Crunchy Snap Pea Popcorn Salad" that has divided opinion on social media. Although an overwhelming majority seemed to find nothing delectable about the popcorn salad, a few defended the food blogger and the recipe.

The recipe video, which has gone viral on the microblogging platform with over 1.4 million views, shows Molly whipping up some popcorn salad with peas, carrots, shallots, watercress and celery leaves. The ingredients are tossed through a salad dressing made of mayonnaise, sour cream, cider vinegar, sugar and Dijon mustard.

What the hell is this pic.twitter.com/7PSYVtytQ8

The video has racked up 1.4 million views on Twitter, where some wondered if the video was a spoof or parody.

No way this is a real recipe. Got to be a parody

This video has infuriated me. Ruined my Sunday. Why is she doing that?

"Food Network is just trolling us at this point right?" asked one Twitter user. "Some kind of abomination," another remarked.

Others pointed out that the salad dressing would turn the popcorn soggy. "I'm so confused. Doesn't the dressing make the popcorn soggy? How do you even eat this?" a user asked. "'Soggy popcorn, delicious!' - Said no one ever!" another quipped.

Don't be hating on my girl Molly

What do you think of this popcorn salad? Let us know using the comments section.