The mother and son duo danced in front of a crowd of about 130 guests at Ever After Farms Blueberry Wedding Barns in Florida, US. 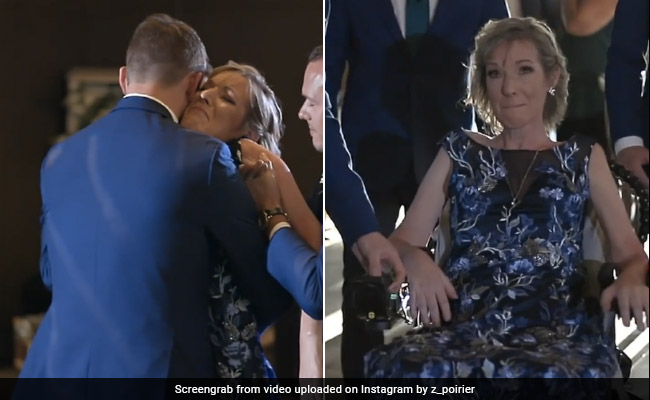 The pair danced to the tune of "Humble and Kind" by Tim McGraw.

In an emotional moment captured on camera, a mother who lost the ability to walk after being diagnosed with ALS (amyotrophic lateral sclerosis) was able to dance with her son on his wedding day with the help of his brothers.

Zak Poirier and his mom, Kathy Poirier, went viral after the son shared a video of the heartwarming moment on Instagram. In the caption, Mr Zak informed that his mother was diagnosed with ALS just before he graduated from law school. Now, marking another big milestone in his life, the son made sure that his mother's ALS wasn't going to affect his wedding.

“Despite not being able to stand on her own, my mom and I shared a dance at my wedding. She inspires me everyday to be humble, kind and selfless,” Mr Zak wrote in the caption of the post.

Mr Zak, with the help of his two brothers, helped wheel his mother to the middle of the dance floor, before lifting her directly into his arms. The pair slowly moved in time to the tune of “Humble and Kind” by Tim McGraw.

The moment between the two has been celebrated online as internet users expressed their joy at the video. One user wrote, “The way you look at her, talk to her and take her into your arms is one of the most beautiful things i've ever seen.” Another added, “This has just made me cry. Your mother is blessed to have sons like you all and you are all very, very, very blessed to have an amazing, strong & beautiful mother like her.”

According to FoxNews, Mr Zak's younger brother Nick and Jake helped their mom get to feet and offered her support so that she could dance with her eldest son at his wedding. Speaking to the media outlet, Mr Zak said that he and his mother danced in front of a crowd of about 130 guests at Ever After Farms Blueberry Wedding Barns in Florida.

“We had planned it. The actual dance itself was spontaneous,” the 28-yeard-old said. “We were both pretty adamant that we wanted to share a dance regardless of how long it was. By the time we got up there, we weren't really sure how it would work — but it went perfectly, and it was great,” he added.

The mother, on the other hand, said that she felt honoured that her son wanted to dance with her at his wedding, however, she also added that she was anxious ahead of the moment. “I was not nervous about dancing with my son. And I was not nervous about my other two sons holding me up or getting me up. That wasn't what bothered me,” she told FoxNews, adding, “It's that this was such a milestone in one of my kids' lives, and it wasn't what I had envisioned.”

“It was really emotional to have to accept the fact that I can't stand or use my hands. And that people would be watching me. And I felt like I was going to be judged. But I knew I wanted to do it, and I wasn't going to let anybody tell me I couldn't,” Kathy Poirier said.

When mother and son completed their dance, they received a standing ovation from their guests. Speaking to the media outlet, the duo said that they are happy they went through with their dance plan instead of opting for a slideshow or other alternative to replace the wedding tradition.

"It's Like A New Year": Man Gets Married For The First Time At Age 95 In Touching Ceremony