An incredible video is becoming popular on the internet, which shows a magnificent view of Niagara Falls along with rainbow formation. 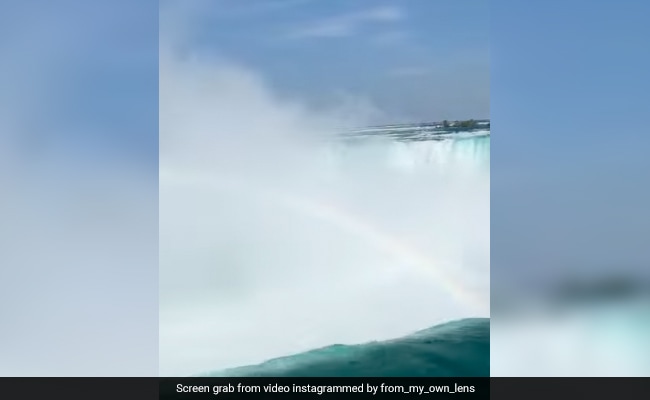 Picture shows a spectacular sight of falling water and the formation of a rainbow in between.

Internet has plenty of amazing content, especially during monsoon when the season revitalises the flora and fauna back to life. The pouring raindrops also fill our hearts with joy and create some of the most beautiful sights in the world.

An incredible video is becoming popular on the internet, which shows a magnificent view of Niagara Falls along with rainbow formation. This is considered an uncommon, but the sight is absolutely wonderful.

It has been shared by a user named Shampa on Instagram on June 18 with the caption: "A rare sight. A full rainbow on the falls. A beautiful sight."

The viral video shows a spectacular sight of falling water and the formation of a rainbow in between the white froth all around.

Since being shared, the video has amassed over 29.2 million views and more than 1.8 million likes.

Users were absolutely delighted to see the video. "This is such a beautiful sight to behold in your eyes forever," a user wrote.

Another user said, "What an incredible vista. Beautifully captured."

"Treat to the eyes," a third user simply said.

Recently a video from Maharashtra's Naneghat was going viral on the internet that showed water from a fall between the two mountains going upwards rather than falling down. The wind accompanying the rainfall in Naneghat made the beautiful scene possible.

The video was shared by Indian Forest Officer (IFS) Susanta Nanda on Twitter on July 10.