The viral video shows three pet dogs and a cat getting ready for a family photograph, but the kitten keeps looking away from the camera. 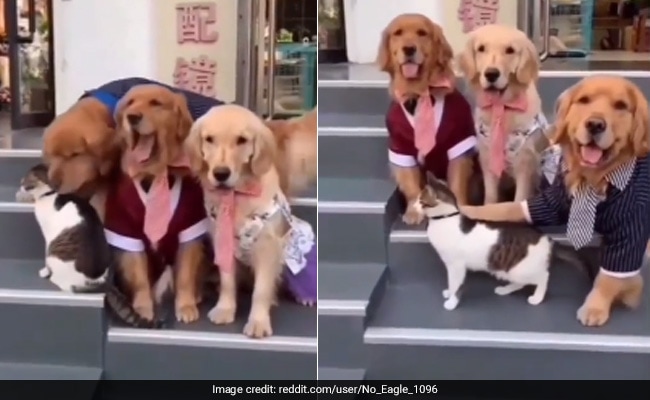 The kitten doesn't want to pose and keeps looking away from the camera.

Internet is full of videos, which show funny behaviour of animals. One video is going viral on social media which has amazed the internet and left social media users in splits.

The viral video shows three pet dogs and a cat getting ready for a family photograph, but the kitten doesn't want to pose and keeps looking away from the camera.

One of the pet canines, the elder of the three dogs, approaches the kitten, holds her through the neck belt with his teeth and drags her to the front. But, the stubborn cat refuses to look at the camera. So, the dog once again places his hands on her trying to force her to pose for the family photograph.

The video was originally posted by Strange Incident on YouTube two years ago but is going viral again now. It has been shared on Reddit by No Eagle.

The video has amassed over 13,000 likes and numerous comments by the users.

A user wrote, "Oh, you don't want to be in this photo, you're going to be in this damn photo, get over here, get the hell over here..i'll drag you if i have to, is that what you want, you got it , buddy."

Another said, "Awesome. Take the award."

"That's a patient cat. Mine would have gone murderous," wrote a third one.

Videos of animals are frequently shared on social media and people love watching them. A Yorkshire Terrier dog was seen playing with a baby bird emu in a recent viral video. Both the cute animals were seen enjoying each other's company, poking and playing among themselves.

The video was posted by ViralHog on Twitter and YouTube with caption, "Ziggy the baby Emu plays with Paris the Yorkshire Terrier."